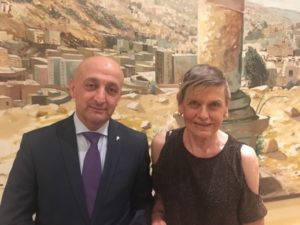 InterContinental Jordan, Amman, is the city’s venerable luxury hotel. It opened in 1963, when its location, at the city’s First Circle (traffic roundabout) was near the centre of town – there are now nine Circles, but the hotel remains the hub for much of Amman’s who’s who population. This is where you might well find Jordan’s decision-makers just dropping in, in the way their Filipino counterparts used to in Jeepney coffee shop in the (same era but now-vanished) InterContinental Manila. But this InterCon has kept itself remarkably up to date, as the gal found talking to Hotel Manager Bassam Abu Hassam, who first came here, as a 17 year-old student, in 1989: his banqueting manager then is still here, same position, and it was this young man who took the photo on the left. 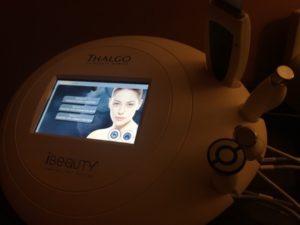 The photo above shows the light feature above reception in the enormous eighth floor club lounge, which services 97 rooms on floors seven through nine – what you cannot see in the photo are reflections of yours-truly with a glowing face, the superb result of a mere 45 minutes’ treatment in the spa. A young lady from somewhere in northern China used Thalgo’s iBeauty machine, which more or less acts as a mini Hoover over the skin (better not go into details). One of the other implements on the machine then fluffs up underneath the chin, which is very good not only for the skin but for the ego. Miss China says that this treatment is tremendously popular with Jordanian men (‘some of them cannot get enough of it, they come every week’). The spa, and an enormous Cybex gym, are in an impressive three floor building, opened since my last visit: the pool outside is as it was, curvilinear and, especially at weekends, dotted with kids. 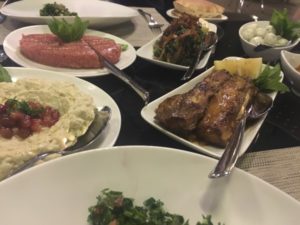 A taste of the enormous mezze

The hotel still has an array of restaurants, Indian (coincidentally initiated by now-GM of InterContinental London Park Lane GM Alvaro Rey, who last night, Friday, September 15th, 2017, launched his latest restaurant creation, Ella Canta, in his current hotel), international, Mexican, and Lebanese, where we ate. It is run under licence from Beirut’s famous Bourj Al Hamam, started back in 1958 by Fawzih Elias Khoury. Jordanians dine late and they love eating outside and the terrace, which must hold about 250, was full by the time we left at nine (I needed to get up very early the following morning). Please bring a small mezze, we begged the servers, but they do not know that concept. Dish after dish appeared, with all the classic hommus and tabbouleh and raw kibbeh (want garlic?), and superb marinated eggplant. A main course was really unnecessary and there was no space for this month’s free dessert. 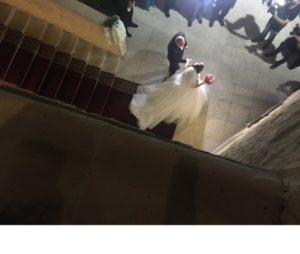 Bride and groom descend the steps

I had wondered why the 27 stone steps leading from the lobby down to the pool level had stair-rod retainers but then all became clear. The steps now held a richly patterned carpet, down which a bride in sky-high heels progressed with her new husband, to the accompaniment of clapping from those below (see the second video, below). I went back up to my seventh floor suite – see the first video below) and despite the wedding noise slept like a log (the bed was really comfy). My requested yoghurt, with a teapot of coffee, arrived promptly at four – I fully expected it to be brought by the banqueting manager! At 4.20 the Mercedes (we have WiFi, and would you like classical music?) was ready to leave (please put your seat belt on – a unique request, on this trip), and yes, I meant it when I said I cannot wait to come back, yet again, to this really comfortable luxury hotel. SEE TWO VIDEOS, BELOW