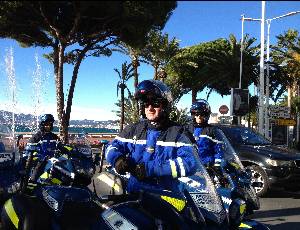 Cannes police, at the ready...

Cannes is one of the cleanest and safest places you can imagine – and this comes from someone who for five mornings running was, well, running, along the Croisette. Out of that luxury hotel, the Martinez, and past the casino headland, a 45-minute circuit in all.

Long before dawn, there was already an army of dayglo-coated street cleaners out. Later in the day, there were posses of movie-star-like police, sometimes swaggering left to right as they paraded, their belts weighed down with truncheons and phones and radios and, surely, guns.  And lots of motorcycle police.  The gal would love to have had a ride. 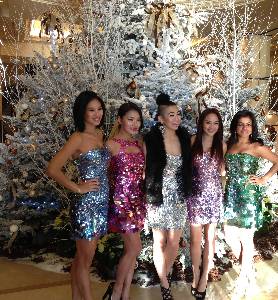 Blush in front of the Martinez' superb Christmas-tree fantasy land

Back inside the hotel, the tree glistened with whites and lights.  A quintet of fascinating women was being photographed in front, each wearing a different colour of sequinned dress.  This is Blush, the Asian girls’ band that resulted from Project Lotus.

In 2010 FarWest Entertainment devised an all-Asian group, advertised it and auditioned over 3,500 in China, India, Japan, Korea and the Philippines.  Thirty-five of these were brought to Hong Kong for training and final assessment.  The result?  The five winners are sensational. 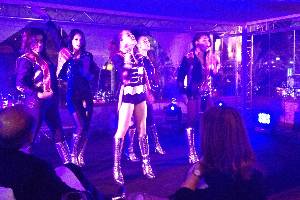 And the quintet later performs, sensationally, at The Academy's gala dinner

There is Alisha Budhrani from India, Angeli Flores from the Philippines, Ji Hae Lee from Korea, Nach – Natsuko – Danio from Japan (she currently sports a tall Mohican haircut, shaved either side) and Victoria Chan, from Hong Kong.

They entertained at the American Academy of Hospitality Sciences gala that its New York-based President, Joe Cinque, hosted at the Martinez. But first it was work time, and the lucky guests assembled in the same ballroom that the previous night had held some of the 3,000 revellers at the official ILTM party. 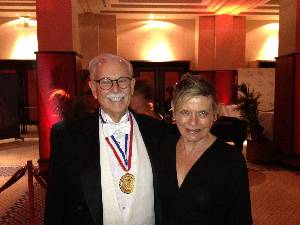 Tonight a red carpet led the length of the room, and Florida’s top butler, Tony, who progressed from Marjorie Merriweather Post to his present role of handling Ivanka Trump’s father, the one and only Donald, was jointly in charge, with the lovely emcee, Karen Dixon.

One after another, honorees from hotels in Utah east to Seoul, went up to receive giant plaques (how do they fit them into their bags to fly home?). The newest Dorchester hotel, Le Richemond in Geneva, got one – it is just about to begin a complete refurbishment.  Its GM, Klaus Kabelitz, was flying back by EasyJet. 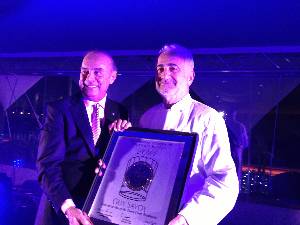 Host Joe Cinque and one of the visiting chefs, Guy Savoy

And then those lucky enough to be invited to stay past the Taittinger and on to dinner proceeded to that holy of holies, the hotel’s Michelin two-star Palme d’Or, where Christian Sinicropi, in a pretty lime green jacket, is regularly in charge.

Tonight he had the extra help of two friends, Guy Savoy from Paris and Jean Georges Vongerichten from New York. We proceeded from Guy Savoy’s Artichoke and black truffle soup with a truffle-layered brioche via Vongerichten’s Wild turbot with spiced jade, and Christian Sinicropi’s Black Angus filet with a white truffle potato tower, on to the most memorable dessert ever, a white foam called Several spoonfuls in mature contrasts, a milk cream, leaves and sweets, by Oliva Oswaldo, patissière at Andoni Aduriz, Errenteria … 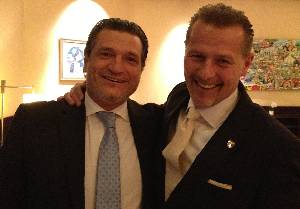 Somehow, in between Blush cavorting around, Joe Cinque handed over two complete-surprise lifetime achievement awards, first to the gal, for ultimate travel writing, and then to the Martinez GM Richard Schilling, for ultimate professional hotel keeping. He will be so missed (he leaves the Martinez end of March 2013). He stayed around tonight for, yes, the second 0400-finale in two nights.

I could not make it to the end but I bet two of the last happy partygoers were Karlheinz Hauser, Patron of Karlheinz Hauser in Süllberg, Hamburg, and Europe’s top travel concierge, Raffaele Sorrentino, who had met when both worked, some years ago, at another of Europe’s top hotels, the Adlon Kempinski, Berlin.