Be different, gal – try a great restaurant that happens to have rooms attached. And that is why, in search of luxury dining, we are at Jonah’s, the only Relais & Chateaux lodging in Australia’s New South Wales.

I was greeted by the magnets who draw people here, Chef Alfonso Alés, from Spain by way of cooking with Ferran Adriá, Michel Guérard and Thierry Marx, and Sommelier Christian Bäppler, from Germany via Orient-Express’ The Observatory in Sydney. 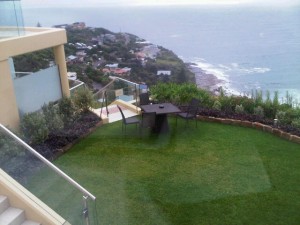 Even on an overcast day, the view down from Jonah's to Whale Beach is magnificent

It would be about an hour’s drive from Sydney airport, I was told.  The challenge was it was pouring with rain, it was rush hour, my baby apple-green Honda (no, no Kia for me) was rather slow and I was not sure of the way.

It therefore took me two hours, and when I pulled in to Jonah’s, which looks like a single-floor house along Bynya Road above Whale Beach, I was heartily relieved.  Looks can be deceptive.

From the  ‘lobby’ of this private house you go down 14 carpeted steps to most of the 11 bedrooms. Bynya Road is high-high, like about 500 feet, above Whale Beach, one of many scenic coves leading to the Palm Beach peninsula, ten minutes’ drive further on.  Think the Hamptons outside of New York. 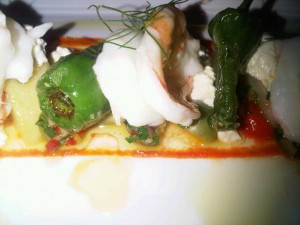 Room five, like its neigbours, is simple style, functional with class. The bathroom, which opens to the bed area, has a corner set Jacuzzi tub and Molton Brown toiletries.  There is tea and coffee, with a cafetiere, and excellent Wifi. The big terrace looks down the hillside to that gorgeous rich-gold sand, the blue sea and crashing waves.

Dinner – or lunch – is the reason people come here.  By 7.30 the dining room, like a giant glass box to give maximum views, was full.

Colour comes from palest grey-mushroom carpeting and matching chair seats and three semi-circular banquettes, for three or four, with pink flowers on ledges behind.  Tables are set with crisp white linens, Tasman Bone China and nothing else, no flowers or salt and pepper at this stage. Music is soft, and deliberately indistinguishable.

Next came the beef

There is a dégustation menu, or you can go à la carte.  Check the wine list first.  There are over 860 labels, including some to show off (say Cattier’s NV Armand le Brignac Blanc de Blancs, at only A$1,100 for a fancy bottle whereas you get the much more desirable Cristal 1999 for only A$550).

A waiter called Jonathan, a paramedic in waiting, raved about the Riverina Angus cross he had had for his dinner. Since it was on the menu, it had to be on the order.  First came an amuse in the form of a china spoon with mini cubes of marinated salmon and cucumber.  Next came three King prawns from Queensland, Mediterranean-style with Padrón peppers, a Spanish specialty, and feta and olives and potato confit.

Everything is superlative quality - the breakfast yoghurt is addictive

The triumph was indeed the beef, a cross, as I now know, of Angus bull and Hereford cow, here a sort of grilled flank steak with corn ‘potato chips’, and glazed pine mushrooms and bone marrow.  I passed on Jonah’s Black Forest gateau, or Australian cheeses or tea and coffee…

What would Constance Vidal have thought.  This is the English widow who built a house here, at 69 Bynya Road, way back in 1928.  Now the Jonah’s complex, which includes a neighbouring house that can be sold as a three-room private villa, with pool, is owned by golf enthusiast Peter Montgomery, who also owns Bonville Golf Course, five hours’ drive away.

He is understandably proud of both his establishments – his Australia Day party, on Thursday January 26th, 2012, had former Prime Minister Bob Hawke among the guests.  At other times, celebrities welcomed by Jonah’s include Justin Bieber, Cate Blanchett, Bono, Jeremy Irons, Mick Jagger and Kevin Spacey.

In the morning, the sun shone.  I went for a run, right along Bynya, right down the steeply-winding Norma, right along Whale Beach and left on Surf, right to the sand.  Already, at seven, some guys were getting a barbie going while many others were surfing. 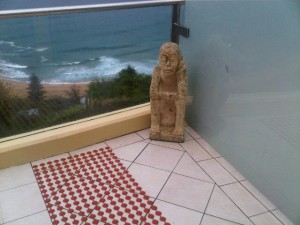 And all the while, a small stone sculpture kept watch over the private terrace of room five

Back at my Jonah’s home, I raved over the cream yoghurt (the full breakfast, a set two courses with choices, includes the yoghurt as a topping, with honey, for muesli, perhaps to be followed by a soft herb omelette with lightly-smoked ocean trout and dill crème fraîche).

At weekends, by the way, Jonah’s is so popular it is dinner-bed-and-breakfast, only – and out of your room by 10.30 am the following day.  Personally I would also consider coming here just for lunch, taking a seaplane from Sydney’s Rose Bay for a 12-minute scenic flight in a DHC-2 Beaver or C-208 Caravan.

But by not overnighting I would miss the adorable ancient-look sculpted figure on my terrace.  Yes, staying over is the answer.