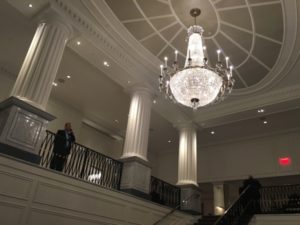 New chandeliers sparkle as if they were always there

When you spend $180 million on an upgrade, you certainly want the whole world to know about it, and that is what is happening at InterContinental New York Barclay. This 14-floor beauty – OK, it has 15 buttons on the elevator panels but there is no 13 – was the height of beauty when it opened in 1926. It was put up by Harold Stirling Vanderbilt, 1884-1970, a man of many talents – railroad executive, bridge champion, and celebrated yachtsman – his victory defending the America’s Cup put him on the cover of Time magazine, issue September 15th, 1930. But why, asks the gal, did he call his luxury hotel the Barclay? It is thought to have been named after a favourite nephew. 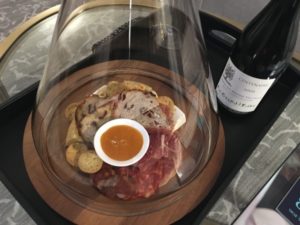 A stylish welcome in the bedroom

Anyway, the hotel was bought by InterContinental Hotels Corporation (IHC) in 1978, and it gradually, over the years, fell into old age. Something drastic needed to be done. Its current owners, Qatar and IHC’s parent, IHG, closed the property on September 12th, 2014. It re-opened April 29th, 2016, and it is absolutely gorgeous. Many remember the elaborate cage of real chirping birds in the old lobby: it has gone, but there are fretwork metal birds on the glass peripheral wall of the entrance’s revolving door. Go into the lobby now – see the video below – and you are amazed by so much polished marble. There is now a spectacular, but incredibly useful, gala staircase at the rear of the lobby, taking you up to the second floor (American terminology) where all the meeting spaces are. 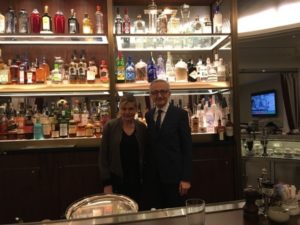 Hervé Houdré shows off 80-plus gins in the lobby bar

On Wednesday June 15th, 2016, the hotel threw a party for 900 industry influencers, travel advisors, meeting planners and so on. There must have been at least eight different bands and groups playing – see one, at the top of this page. Champagnes flowed, as did wines and more, and I particularly loved the sashimi corner (others went for prime rib carved off enormous bones, or bite-sized burgers. Everyone was so impressed by what the hotel’s GM, Hervé Houdré, has achieved, and everyone seemed, like me, to have nothing but praise for both the architects of the new look, Stonehill + Taylor, and HOK, which has done the interior design. I loved the chic taupe and mushroom of room 1208, and the fact that soundproofing is now so good I could not hear any traffic outside. 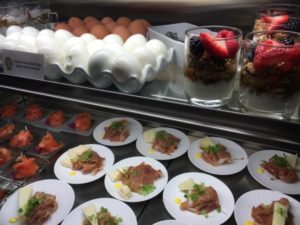 In the dedicated breakfast buffet room, everything is neatly portioned

By five the following morning the luxury hotel was back to its usual spick and span state. Over breakfast with Hervé Houdré I learned that former restaurants, plural, have now been replaced by a prominent lobby bar counter, with over 80 gins (you make money on beverages, not food, in New York). Day-long you can sit around here for light meals but, cleverly, curtains are pulled back at the appropriate hour to reveal a dedicated breakfast buffet room. Look, said my friend, nearly everything is organic and healthy, but for those who must have bad-for-you items, they are all put in the left – ‘sinister’ – side of a chafing dish, next to, on the right, a healthy alternative. Life is full of surprises. NOW SEE THE LOBBY VIDEO BELOW