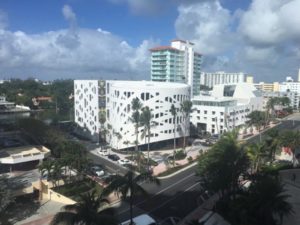 Looking north along Collins, from the hotel

Nicole Sinclair, above, has one of the most enviable roles in the luxury hotel world – she is GM of Faena Hotel Miami Beach – but it all came about by accident. A regular guest at St Regis New York was Alan Faena, the Argentinian visionary of Syrian Sephardic Jewish descent whose name now adorns Faena District, six whole blocks of Miami Beach. He was so impressed by this Toronto woman that, says the gal, he hired her, and her husband, Benjamin Sinclair, to be part of the five-person team that, in 2013, constituted the nucleus of what would be the Faena Miami empire. She now oversees, says the gal, not only the 169-room hotel, but, across Collins Avenue, and to the left of the photo here, first Faena Forum, a carpark building and another a-yet-unattributed space, all by Rem Koolhaas/OMA (there is also a smaller existing hotel, Casa Claridge’s, beyond). 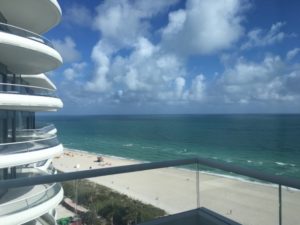 View east from the Presidential Suite

On the east of Collins, beyond the main hotel, is a brand-new block, Faena House residences, by Norman Foster’s practice. The main hotel is a conversion of the 14-floor Hotel Saxony, and many of its rooms have terraces with stunning views down to the beach and out to sea – I especially love the 14th floor Presidential Suite, which has five bedrooms and terraces big enough to entertain up to 100. The whole thing is imposing, very imposing. Down at ground level, enter from Collins and the main lobby is known as The Cathedral: it has six ceiling-high columns covered in gold leaf and, each side, three full-height allegorical frescoes of such attributes as passion. The interiors throughout are by the director of The Great Gatsby, Baz Luhrmann, and his wife, Catherine Martin, did uniforms for the 500 staff, who include the team running the Tierra Santa Healing House spa. 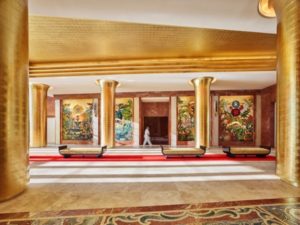 There are libraries and reading rooms leading off, each room with more character than the last. There is a two-tier theatre, with weekend burlesque shows, drink Champagne and eat nibbles that, judging by the stunning tuna crudo and salmon confit I tried in Los Fuegos by Argentinian wunderkind chef Francis Mallmann, must be sensational. There is a 22-seat wine cellar dining room, with a secret bar behind, and a dinner-only Pao Asian restaurant by Paul Qui, who is a sensation in his main base, Austin TX. The biggest sensation of this entire magical operation, however, is Gone but not Forgotten, a nine-foot real mammoth skeleton gilded by Damien Hirst. It sits in the garden, as if an altar to The Cathedral’s progression. 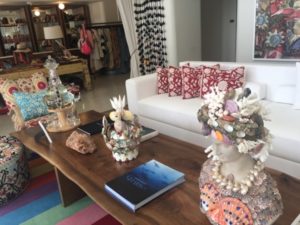 The mammoth, like the entire Faena district, is funded by Len Blavatnik (who worked with Alan Faena, and with Nihiwatu’s Chris Burch, on Faena Hotel Buenos Aires). Alan Faena, with his gallerist wife Ximena Caminos, is always doing something new – after fashion in his native Argentina and genetically creating red roses in Paraguay, he got into hotels, and thus into establishing the Faena Miami arts happenings. Helped by the Faena Circle of advisors, recent happenings here have included the Cuban group Los Carpinteros’ Conga Irreversible, conga backwards, and three-hour processions, of dancers and food trucks, that closed Collins. The pair has established the annual Faena Prize, last won, in 2016, by the UK’s Roger Hiorns, and for 2017, the programme already includes a biennale of moving images, music by pianist-composer Anton Batagov, and violinist-conductor Alina Ibragimova, and performance art by Whoop Dee Doo. And all the while while these and other events are going on, cool-calm-collected Nicole Sinclair has to make sure that the luxury Faena Hotel Miami Beach runs like clockwork. NOW SEE HER AND THE MAMMOTH, BELOW