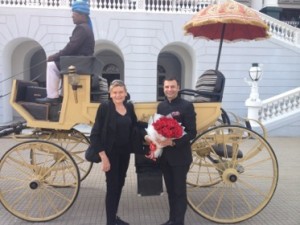 Girish Seghal welcomes a new guest to his palace

There is only one way to arrive at Taj Falaknuma Palace, half an hour outside Hyderabad – by 19th century carriage. The gal is helped out of it, and one of this extraordinary luxury hotel’s lovely staff members offers a variety of soft drinks, all home-made and infused with cinnamon, or lemongrass. Then, as the newcomer, preceded by a turbaned flunkie bearing a traditional brass stave, mounts the 34 stone steps of the main outside staircase, fresh rose petals flutter down from an unseen hand. 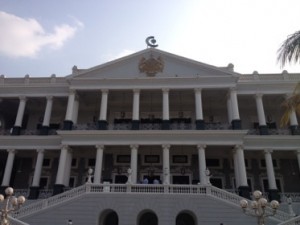 Looking up at the main building

You are immediately in another age, back in the late 19th century. It was 1884 when the Diwan to the 6th Nizam of Hyderabad asked London architect William Ward Marretti to design a palace in his favourite scorpion shape. The Diwan ran out of cash so in 1901 the Nizam, the world’s richest man, took the palace over (he used the amazing Jacob Diamond, now held by the Government of India and said to be worth $130 million, as a paperweight). The Nizam’s dining table, the world’s longest, at 108 feet total, seating 101 with perfect acoustics from one end to the other, is still there. 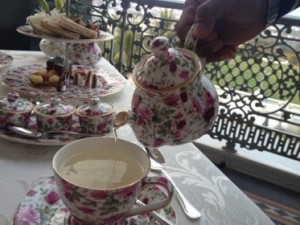 We preferred to sit on the front terrace of the 60-room hotel, and take traditional afternoon tea as we watched the view. A three-tiered tea stand held savouries through to sweet bites, both veggie and non-veg. Our choice of 12 teas, Silver Needle, from leaves of course, not bag, was poured from a long-spouted pot (the glorious floral china is bespoke). A Sufi group, playing assorted instruments in a wailing manner, had been booked but actually they are even better when you are fortified with a really stiff drink inside you. 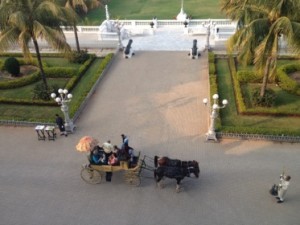 It is still daylight and we hear others arriving. We look over, to see the carriage disgorging incredulous first-timers. You can read all about this Taj-run luxury hotel forever but, even so, when you you are here, and you see it dominating atop 32 acres of mostly-barren hillside, you get a rush of adrenalin, and the instinctive urge to scream WOW…..