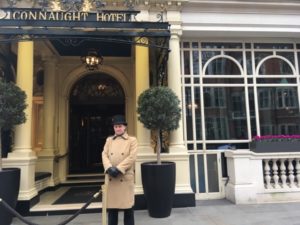 Welcome to The Connaught

Last time at The Connaught, the gal was there for the luxury hotel’s breakfast. Now it was time to have dinner, and a very special evening meal it was too. At the moment the hotel only has one restaurant as it awaits what will be a Jean-George Vongerichten outpost, as yet unnamed. Never mind, it has its two-star Michelin Hélène Darroze at The Connaught, named for its chatelaine, Veuve Clicquot’s female chef of the year, 2015. Arrive at the 121-room hotel and you experience traditional Englishness, with more than seven hints of 21st century internationalism: in the hotel’s front space, for instance, is a unique horizontal freeform sculpture, 62 feet long, Silence, by Japanese architect Tadao Ando. 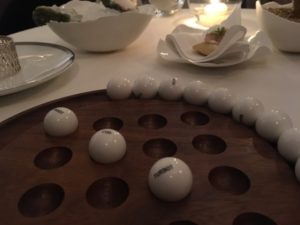 The printed menu is complemented by a solitaire board

A stand at the panelled entrance to the restaurant holds a set of French, or peg, solitaire – see above. The game is first mentioned at the court of Louis XIV in 1687, and here the traditional multi-coloured marbles are replaced by white balls which each bear a single word, ‘lamb’, ‘chocolate’, and so on. What is this all about? After the champagne trolley has been wheeled up, and presented, I was given a pint-sized menu offering courses named, well, ‘lamb’, ‘chocolate’, and so on. The idea is to put the words you want in the peripheral duct of the board, and the waiter does the rest. I chose ‘beetroot’, ‘cod’ and ‘turbot’. I was all set to admire the table-setting, with its pulled-thread napkin held in a fretwork silver ring, Bernardaud china, Christofle silverware, Zalto glasses and a big pink orchid bloom next to a nightlight in a cutglass holder. 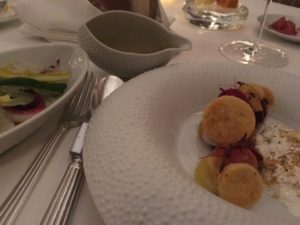 The beetroot dish, with a small side salad

But then foods started to arrive, in the form of a whole brown loaf cut into quarters, to go with Bordier butter (a block of salted and a cone of orange, slightly chili-flavoured), and amuse, with oysters, and a foam-topped beef tartare cone. A few minutes later came ‘ ‘beetroot’ whole baby red and yellow French beets from Laurent Berrurier, with Puglia burrata flavoured with punterelle – bitter green-leaved chicory –  and botarga, and a side salad, with honey vinaigrette. And so on, to cod under a potato wisp, and a military block of turbot. They typically expect you to have five, or seven, courses, not my meagre three, and many choose pairings with each plate, though I thought Gevrey-Chambertin Mes Cinq Terroirs Dme Denis Mortet 2013 went splendidly with the main meal (uniquely, a whole barrel was wheeled to a table nearby, with glasses of wine poured from a pipette). 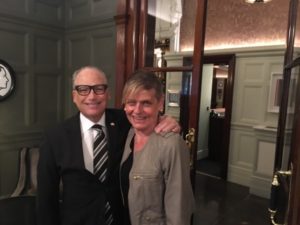 If dining is entertainment as well as service and, of course, food, this experience confirms that Hélène Darroze is a multi-skilled genius. She manages to oversee this restaurant, plus her one-star Restaurant Hélène Darroze in Paris, and she is single parent to two Vietnamese daughters (perhaps her degree in Business, and her initial training, at her family’s restaurant in Villeneuve-de-Marsan, Landes, and then at Alain Ducasse’s Louis XV in Monte-Carlo, all help her manage so much). And this is a luxury hotel, anyway, that attracts as guests, both staying and dining, the renaissance players of today. I was lucky enough, the morning after that marvellous night-before, to spend an hour with Jerry Inzerillo, he who put Sol Kerzner on the map, who went on to run IMG’s 25,000-plus events a year and who now heads, as CEO, the definitive Forbes Travel Guide worldwide. That breakfast was also was a meal to remember – but that is another story. Meanwhile, if you would like to see The Connaught’s divine David Collins Apartment suite, SEE THE VIDEO BELOW.