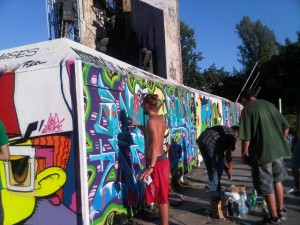 Graffiti in the Bulgarian capital, Sofia, just make a girl smile.  How clever of the authorities to recognize that graffiti artists are addicted.  Just as I ‘have’ to write, so they ‘have’ to spray where-ever to create pictures, or what-ever.

Graffiti – always used in the plural (the singular, for the record, is graffito) – have been around at least since the days of Ancient Greece and the Roman Empire.

It is said that earliest extant examples, in the form of prehistoric cave paintings and pictographs, can be dated to about 30,000 BC.  Today the best-known graffiti artist is an English bloke who goes by the name of Banksy.

In Sofia the authorities encourage graffiti artists by providing areas for them to show off.  On a really baking September day I coincided with a fabulous rock concert in Bulgaria Square.  While hundreds of teenagers gyrated to the music, several of their peers – interestingly all guys – were hectically spray-painting a temporary wall of boards that had been put up specifically for that purpose. Interestingly, too, this graffiti-wall was right in front of a Soviet-style statue, from Bulgaria’s days as part of the communist bloc. 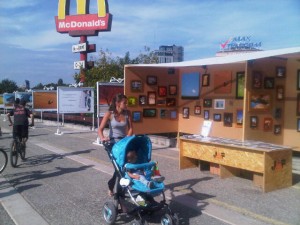 Jogging around Sofia, I loved other temporary art displays, and more-permanent graffiti on outside walls of some shops. I was staying at Hilton Sofia, five-minutes’ walk from Bulgaria Square and the National Palace of Culture.

As a red-hued dawn broke over surrounding mountains, I started an hour-long run around the city centre, passing several more-permanent graffiti boards enroute. Yes, they made me smile.

Everyone seems to smile at this 246-room luxury hotel.  It is only one block from Vasil Levski, the National Stadium. England’s football team had been staying the previous week. John Terry and his boys loved it, said hotel GM Jacques Brune (who comes from the Toulouse area, France’s rugby hotbed). 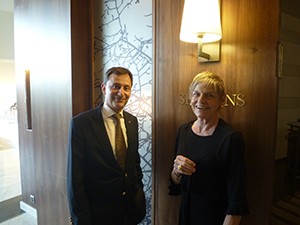 And they loved being able to run in the endless open spaces around.  England’s soccer squad, by the way, came not only with manager Fabio Capello and a host of advisors but with their own chef, Tim De’Ath, who has also cooked for Liam Neeson in Hollywood. 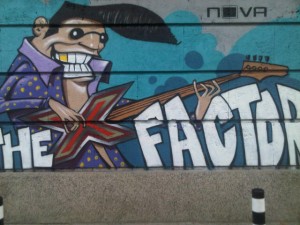 I myself coincided with a wedding. Many of the 160 guests, dressed to the nines, were cocktailing outside the bijou indoor pool as I did dozens of laps, and, after dinner, we snuck in to their dinner venue.  All ages were already line-dancing, Mama Mia! style, as they would until the small hours. Other memories of this friendly hotel? I checked in without my smartphone charger. What type would you like, front desk asked – we have them all.