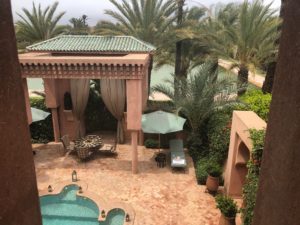 Amanjena is the ultimate luxury oasis, seven kilometres from the medina and central Marrakech. It all evolved thanks to a Moroccan, Ottman Benjelloum, who owns one of the villas-for-sale at the first Aman, Amanpuri in Phuket. He wanted something like that luxury resort here in Morocco, and hence Amanjena opened in 2000. Ottman Benjelloum called on designer Ed Tuttle, best known for Park Hyatt Paris-Vendôme and Park Hyatt Milano.  Here, after long long periods spent contemplating what Morocco already had to offer, Ed Tuttle produced individual units around the sides of decorative pools, some long and narrow and others long and almost as wide. 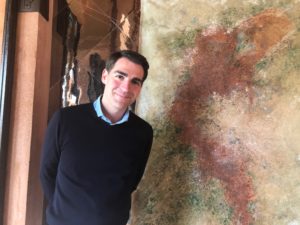 There are 34 completely private single floor villas, and also seven two-floor houses, called maisons. All 41 units have real-log indoor fires and, outside in private courtyards, salas, and sizeable swimming pools and jacuzzis. This is Marrakech’s place for celebrity privacy. Stay here and you might never leave your villa.  Many guests, who are topped by Americans, just stay put, ordering room service.  I was lunching with the Resort Manager, Peter Krstic, and had one of the best dishes of my entire time in Morocco, home-made pasta – see above – with black truffle flaked over.  Yes, of course it helps to have an Italian chef… 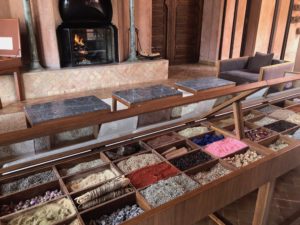 Peter Krstic showed me a mood artwork-area that was a kind of Jackson Pollock formed of powders from different colours of Marrakech stone: it was suitably hung next to a display case of some of those powders and rock bits. He and the entire resort were getting ready for a buy-out, a birthday party that was tacked on to Dior’s extravaganza on April 29th, 2019. The LVMH division’s first-ever presentation of its resort collection outside France was a considerable affair. Dior-branded planes flew all the guests in from Paris and the culmination of a three-day jaunt was the actual fashion show, in a specially constructed tent for 800, in the desert.