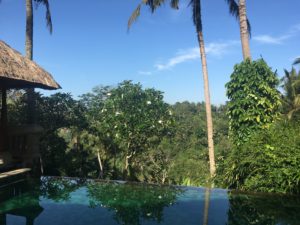 Looking across the gorge

One of the gal’s new friends at the gorgeous Amandari luxury resort in Ubud, inland in Bali, is Sudi, who, like nearly all the 210 employees, has been at the 30-villa resort since it opened in 1989. This woman is hilarious – what does she eat? Rice and vegetables, breakfast, lunch and dinner. We cook, she says, and heat it up and eat it up and when it is all gone we cook some more. She is leading a walk around the estate. Look at all the temples, there are so many temples, she laughs. There are also temples off-campus, and theatres. Last night, one place in Kedewatan village, five minutes away, was performing the Kunti Sraya story, from the Mahabharata epic in Hindu literature. 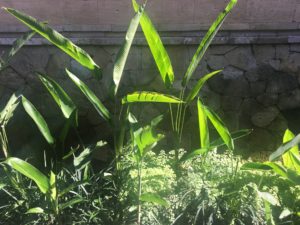 Oh so much gorgeous greenery

In that story, Dewi Kunti, the mother of five Pandawa brothers, has promised to sacrifice her youngest son, Sahdewa, to Rangda, the evil goddess who rules the spirits and witches who haunt graveyards late at night, which all sounds rather dramatic. Today’s cultural offering is less emotionally charged: this evening the resort hosts a jazz–satay special. At all times, too, the resort subtly suggests learning more about its partnership with Kesayan Ikang Papa Orphanage, and for guests who still want something to do when staying in villas that have technology and stunning views, and probably private pools, but definitely no television, there is a well-stocked library to fall back on, and of course there is WiFi, outstanding, in my experience at least. 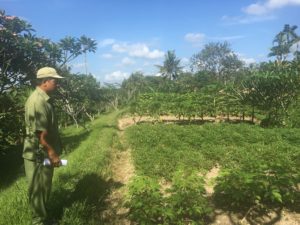 Part of the garden

Sudi, who had dispatched her boss, Jann Kess, to Jakarta to do sales calls, was waiting to take me on a tour. There are 20 gardeners, who farm magnificent collections of salad stuffs, eggplant, guavas, you name it. Adjacent terraces, owned by Amandari, are farmed by Kedewatan villagers, for their own benefit. They practise strict crop rotation, which means what are sometimes rice terraces are now bearing a type of green grass. Sudi taught herself Japanese, by the way, which is very useful here as Japanese guests are the most loyal, many wanting the same villa with each visit: she was also seconded to Shima to help with the opening of Amanemu. 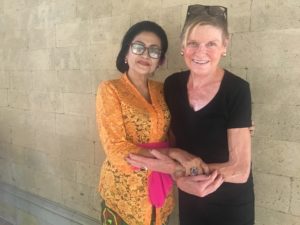 Amandari was the first custom-built Aman resort. After Adrian Zecha had converted his own villa in Phuket into the immediately successful Amanpuri, he wanted to do more. Ibu Siti, who is still very much the grande dame of Amandari, found him an area of rice terraces and Australian architect Peter Muller designed a plausible Balinese village, which is how you could describe this luxury hotel. What has changed since the 1989 opening, I ask? In years past, the guest-list was unashamedly celebrity, liberally spotted with film stars and royalty. Now, in these days of mobile phones, Instagram and privacy issues, these people are more likely to crave, and need, the exclusive privacy of buy-out villas or yachts. Today’s Aman loyalists, I was told, come for authentic experiences, genuine hospitality and lovely people – and of course the contemporary traveller is likely to be multi-generational, or at least with kids in tow.