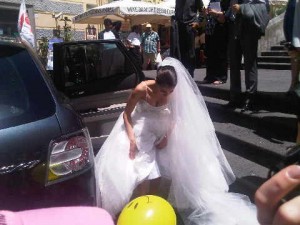 At the foot of Amalfi Cathedral's steps, a bride has to pop dozens of balloons before she can get into her car

Brides abound around Amalfi, and one poor lass in the town had just got herself wedded in the cathedral, and skilfully navigated the 62 steps down to the main square, the Piazza del Duomo, only to find that her getaway car was filled with yellow balloons.  Before she could get in she had to deploy her Manolos to squash’em, says the gal.

Amalfi is a fine little town with masses of history and, unfortunately, sometimes masses of tourists.  It makes sense to avoid being there, if you can, when a cruise ship arrives offshore. 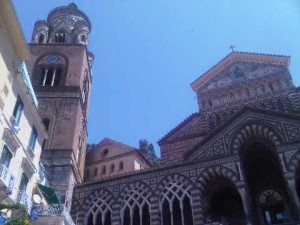 Looking up at Amalfi Cathedral

Yesterday one of the big Regent ships – the Regent Mariner –  was anchored in the bay and it had disgorged its hundreds of passengers by tender and then into full-size buses for tours to Ravello, which meant that anyone staying in the idyllic luxury hotels in the area and taking shuttles to or from Amalfi could have been delayed for an hour or more as those mega-buses tried to negotiate the hairpin bends on the one-car-wide side roads.  (I know, I was caught up in one such bottle-neck for 45 minutes.) 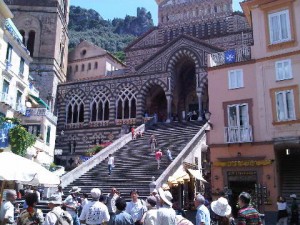 There are 62 steps up to the Cathedral's door...

This surely is yet another reason to sail with smaller ships, those that do not clog local traffic systems when they are in port.  (Good news for cruisers.  Yesterday Silversea announced the purchase of the top Ecuadorian tourism company Canodros SA and its Galapagos Explorer II ship, which means that from September 2013 Silversea will have a second expedition ship.)

Hotel shuttle buses, or any transport – say from Ravello or from Monastero Santa Rosa – will drop you in Piazza Flavio Gioja. 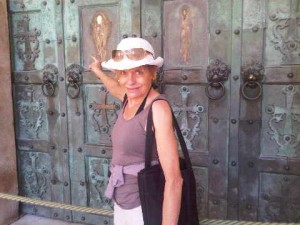 ... the all-bronze doors are 11th century (how glorious when the entirety shone)

From here, head north along Viale Lorenzo d’Amalfi to the Piazza Duomo, with the cathedral, focal point of Amalfi, on your right.  Look up at the amazing façade of the 12th century building – an even earlier Christian basilica stands just behind.

The Cathedral is dedicated to St Andrew, the patron saint of fishermen.  The story goes that St Andrew’s bones were held in Constantinople but in 1205, during the Fourth Crusade, various relics were ransacked and the bones brought to Amalfi.  They were later interred in the altar in the Crypt below the cathedral. 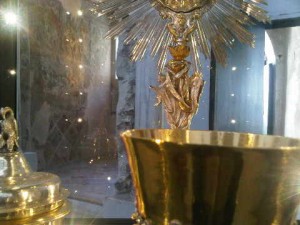 A display of centuries-old priceless treasures

It is well worth climbing the 62 steps up from the Piazza del Duomo to the cathedral. Its bronze doors are said to have been cast in Constantinople in the 11th century (they are signed by Simeon of Syria).

These doors must have been truly amazing when they were all polished and shone like gold.  From here, a ticket takes you around the quiet arabesque cloister, into the basilica and its displays of treasures, and then down into the crypt.  Climb back up again into the cool cathedral itself before emerging into the hubbub that is Amalfi. 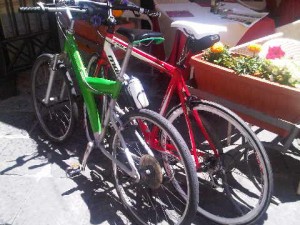 In the clogged pedestrian-only streets, bikes - or baby buggies - are the only wheeled solution

And hubbub it is.  Continue along Lorenzo d‘Amalfi, which soon turns into a thoroughfare only about eight feet wide, for some of the best shopping, bags, shoes, souvenirs. I needed some elastic, yes elastic.  At the Duomo I turned left down a pedestrian alley that took me to Piazza del Dogi and there, straight across, was Mecca, a shop which literally had everything from sweeping brooms to elastic.  Black or white? 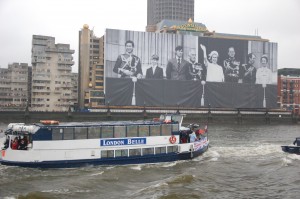 Talking of black (and) white. See this amazing shot taken by a good friend of mine, a retired Admiral in the Queen’s navy…. it happens to show one of the thousand-plus boats taking part in the Queen’s Diamond Jubilee flotilla on Sunday June 3rd, 2012.  On that boat is one of my sisters.

The boat is passing Sea Containers House, until a few weeks ago the global headquarters of Orient-Express, which of course owns the magnificent Caruso in Ravello where I started this particular trip a few days ago.

By the way, even when staying in luxury hotels one regularly runs out of things.   For anyone planning to be in the Amalfi area this summer, here is a check-list:

– bring plenty of spare storage space for the ceramics, shoes, bags, sarongs and other 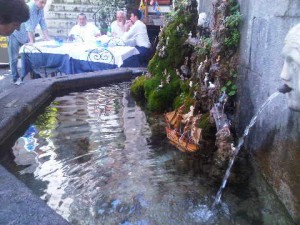 Now back to Amalfi, a restful pond (throw coins in for luck), with some locals resting, behind

must-buys that you will of course just have to purchase on the trip.

– pack comfortable walking shoes (leave the Louboutins behind, or at least reserve them for evenings only).

– shorts are de rigueur for daytime.

– you need a sunhat. Do not worry about looking a fool (you will just fit in).

– you need to be fit.  If necessary go on a diet before arriving in the area so that you can manage all the steps everywhere.

– people are incredibly nice and speak better English than you may imagine (but be careful of your valuables).

– Amalfi-area hotels do not ‘do’ tea-kettles in the bedrooms and they have not yet discovered the essential espresso machines that are in every bedroom throughout Asia.  If you need early morning, or other time, tea or coffee, bring your own kettle and supplies. 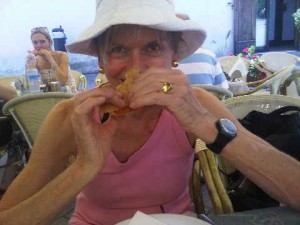 And, two of us, taking a panini break

– ladies, and all those used to cotton facial pads and toothbrushes and shaving supplies in Asia’s hotels, again, you need to bring your own (if you forget, head to Mecca in Amalfi).

– try to avoid travelling in the Amalfi area when cruise ships are in port.

– and while mobile connectivity, and thus mobile e-mail pick up, is generally good, the more luxurious the hotel, the more tentative, and nerve-wracking, is the wireless internet. (Paradoxically, and worldwide, this is especially true if you are staying in a top suite.)