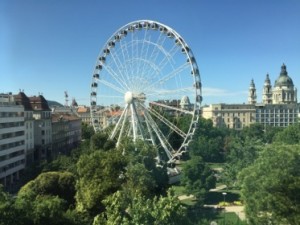 View from suite 714, a fairground wheel, with St Stephen’s to the right

Views from luxury hotels tend to be memorable when there are a couple of special things. Look out of suite 714 at Kempinski Hotel Corvinus and there are two such USPs. Is this a fairground, here in Elizabeth Park (no, it started out as a pop-up Ferris wheel and had stayed).  Yes, to the left is this gigantic Ferris wheel, apparently now a permanent feature – the wheel is managed by Károly Gerendai, who is also the brains behind the city’s annual Sziget Festival. The wheel runs until midnight every day and the gal is told that it is a city beacon for those flying in on evening flights. To the right of this photo is St Stephan’s Cathedral, named for the national saint. Apparently his right hand is preserved in the cathedral. 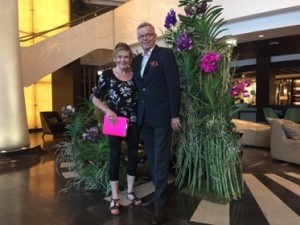 I am meeting another Stephan, Stephan Interthal, GM of this 349-room hotel, for dinner. We could have done Nobu but that is ubiquitous to many countries. We decided instead to do Modern Hungary, in food and atmosphere. ES Bisztró, which means AND bistro, is a comfy-fun, cheerful indoor-outdoor space, spilling, summer-long, to a terrace in József Nádor street, just behind the hotel. Sit there and watch passers-by, some of them coming in and out of Zara, immediately opposite. The ES colours are scarlet, black and white. Servers wear tight red jeans with ES on the rear, and red-faced white shirts. A red butcher’s-bike stands ready, if it is needed. 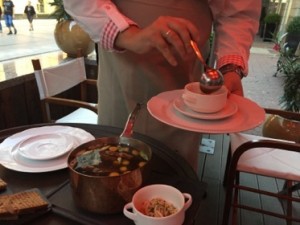 The server ladles broth, first of three courses from the same cookpot

We choose an Austro-Hungarian special, tafelspitz, which is beef served as three courses. A lump of beef rump is cooked in metal saucepan slowly, with water and veg and 1 bit of bone per diner. The cooked pot is then put on to a warming pad on a wood tray, on the table, and served by our waiter. First he ladles beef broth into cups which already have noodles in them. Finish that, and I am brought a Laguiole knife inscribed with my name, oh wow. It will be kept for my next visit – I now have Laguioles, personalised, waiting for me here in beautiful Budapest as well as in Dubai (in the Rib Room in Jumeirah Emirates Towers). 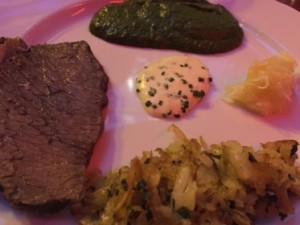 Third course, the meat itself, comes with accompaniments

We continue with our meal. Now comes a cross-cut of bone, brought out from the pot. The bone marrow inside must be spooned on to rye bread toast, and salt and pepper should be liberally added. At this stage we go on from a chilled Sauska Villásnyi Rosé 2014 to an IKON, Királyok 1199 – vintage 2011 – a Syrah and Cabernet Franc which is named for the 1199 battle of Rád. And now the final meat dish. We are each given a slice of beef, oh so well cooked, no knife is actually necessary. This comes with dollops of apple sauce, horseradish and spinach purée. We watch our neighbours, going on to icecream spaghetti bolognaise (icecream put, table-side, through a hand-held mincer, fruit sauce put on top, and then a sprinkling of grated white chocolate). 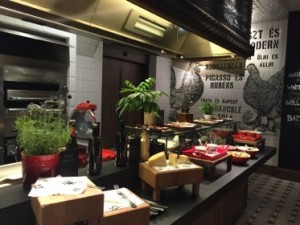 What am I learning on this trip to Budapest? The people are imaginative, and lovely. Hotels are so well regarded that people love working in them – many of the staff here are graduates, and perfectly happy to be working, at least part-time, in the hotel sector. They want customers to have a good time. There is lots of personalisation. A blackboard in ES Bisztró lists, just written in white chalk, the names of the duty chef and manager. A nice touch. Another blackboard says that this is the logo that is put on all Hungarian products. Another nice touch, which shows both national pride and also an understanding that today’s luxury traveller cares about provenance of food. 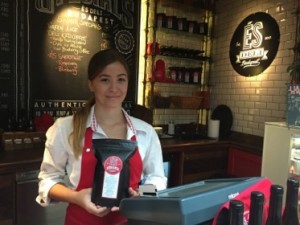 ES Deli-to-go has its own coffee blend

Local pride is shown in an outstanding booklet in all bedrooms. I read that Lady in Red, a welcome hostess, Nikolett Venesz, recommends tourists should visit Gozsdu Courtyard in the city’s old Jewish district, while Financial Controller Peter Folk suggests taking tram 2 along the Danube. Another thing that is noticeable in Budapest is cooperation and friendliness between luxury hotels and also with outside partners. The Kempinski, for instance, worked with restaurateur and boutique hotelier Roy Zsidai, formerly head of HVS Hungary, to convert a tiny leased-out display vitrine into a phenomenally successful ES Deli. Thanks to master blender Máté Nezvál, ES Deli also has its own-label coffee, a 50-50 blend of Guatemalan and Rwanda beans. It is – sensational.