The designer Alexandra Champalimaud has oodles of style.  She is one of those women that the gal takes to immediately (not many interior designers are in that category, though Jacques Garcia, Glenn Pushelberg, and Fiona Thompson of Richmond International, are also near the top of the list).

Some designers are quiet and reticent.  Others, like Philippe Starck, he of clear plastic chairs and spas with 12-foot yellow chandeliers, are verbally incontinent and do not listen.

Alexandra is just divine, and because she has been travelling all her life she understands the difference a ‘wow’ makes to a hotel’s look – she remembers, when 11, staying at The Ritz in Madrid with her Portuguese mother.

She was born in Lisbon (her father was English), went to English and French boarding schools and graduated in Decorative Arts from Lisbon’s Ricardo do Espírito Santo Silva Foundation.

At 18 she married an army officer and lived in Mozambique, in 1974 they fled the Portuguese revolution and relocated as a family to Montreal – her first son, the charming and devastatingly good-looking Lopo Champalimaud is CEO of the world’s best spa site, wahanda.com, which is chaired by Wolf Hengst, still-admired former World President of Four Seasons (I last ran into him at the Martinez in Cannes). 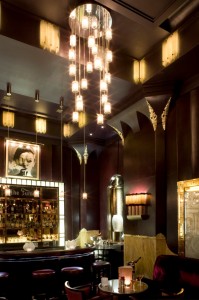 Her design work includes the Caramel Room in London’s Berkeley Hotel.  We met in Le Fumoir at another of the Maybourne Group’s three iconic luxury hotels, Claridge’s.  She has made this one seem like a 1930s dance, on your toes gal, no flat feet, waft over the troubles of life.

But that is what a Champalimaud design does to you.  You seem to fly over the mundane (talking of which when Mrs Schnitzer flies she, like me, travels hand-baggage, but hers is a black Swiss Army trolley rather than my beloved black Porsche Design by Rimowa, and, on board, she inhales eucalyptus and peppermint while I am probably busy working or sleeping).

You can see the results in such lovely hotels as St Regis Beijing and The Liberty in Boston, a conversion of the 1851-vintage Charles Street jail. 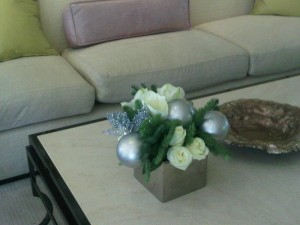 When we visited the re-done Bel-Air while in Los Angeles just before Christmas, I thought the Champalimaud transformation was one of the most gorgeous new-looksever achieved.

She took that pink palace and turned its inside into a fairytale that just seems to have landed on Beverly Hills’ Stone Canyon Road.

The reception is now a repose of light wood, ice (or icecream) colours and masses of big windows looking into greenery. Bedrooms are soft havens, not too feminine but definitely not John Wayne.  They all have Travertine marble floors, and soft oak ceilings.  Walls and fabrics are soft cream.

There are highlights of dark mole, like the hand embroidered silhouette lines on the Italian curtains, which must have been made by nuns as it is difficult to think of other Italian doing such painstaking work.

Art Deco through and through - ceiling of Two-E, The Pierre, New York

Coming back to The Pierre in New York it is always a joy to see what has happened since Taj reopened this Leading Hotel in 2009. The lobby is a soft sunrise hue, but leading off it what used to be management offices is now the Two-E inner sanctum that has become meeting place for The Top.

Other visitors to The Pierre congregate for afternoon tea or a snack in the hotel’s central Rotunda, like a 30-yard blown-up balloon with parquet floors and walls of angelic countryside trompe l’loeil, painted in 1967 by a 50-year old Kentucky artist called Edward Melcarth  (he was obviously commissioned by J.P. Getty who had bought the hotel in 1938 for a mere $2.5 million – it had been named way back in 1930 when it opened for its developer, Charles Pierre Casalasco, who later went bankrupt and died two years afterwards).

And many more visitors will soon be rushing to The Pierre. Its corner-set restaurant is going to become an exciting 1950s-vintage casual Italian, with outdoor seating on E 61st Street.  It will be called Sirio and will be hands-on managed by the legendary Sirio Maccioni,  the legendary name behind Le Cirque, including its branches in Las Vegas and New Delhi, at The Leela Palace Chankyapuri.

Can’t wait to see Sirio in The Pierre, especially since it will be designed by Adam Tihany – not listed in the opening paragraph above as I have not talked to him in yonks (come on Adam, the ball is now in your court).

Meanwhile, staying in The Pierre continues a happily stress-free occasion. The internationalist gets what she (or he) wants.  Sparkling, miror-like marble floors in public areas, smiling front desk and concierge, and the two-Fs, flowers and Financial Times.

The third-floor gym, with mythical Indo-Chinese picturesque wallpaper and lots of perfect bananas and fitness drinks, for free, opens at five. The gal was there on the dot, took a bottle of Evian out of room 819’s automatic minibar (a note the previous night had said take it, with compliments, and no charge on check-out – I was also told yesterday’s NYSE closing-bell prices and today’s weather).

A copy of the Financial Times in hand, I headed over to Penn Station for a healthy pre-dawn breakfast at Zaro’s, a giant multi-grain roll and black coffee, and felt somewhat alien as the others nibbled on even-more-giant chocolate muffins and sipped diet coke.  If there had been time one could even have done a bit of early-morning retail therapy…