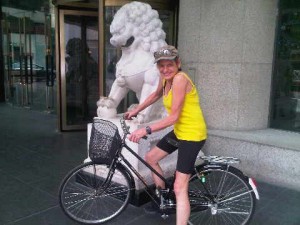 Guarded by a Peninsula Beijing lion and ready to explore the Forbidden City..

Here in Beijing, and another world. A few hours ago the gal was thinking how weird is the cupcake phenomenon. In England they were always called fairy cakes, in Australia, patty cakes. They go back at least to the end of the 18th century, ‘a cake to be baked in small cups’.

Forward to this century and Sex and the City, and Magnolia Bakery, and the 2010 book ‘Martha Stewart’s Cupcakes‘, with 175 ideas. By volume people pay probably four times as much as for an ordinary, big cake, and you cannot even eat them in one mouthful.  They, or their bakers, have even spawned an association and they, themselves, have mini-invaded Heathrow. 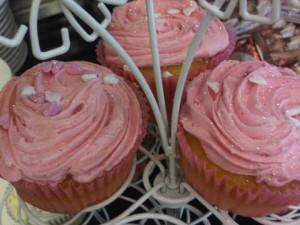 An artistic display of - edible - cupcakes at Heathrow

There is a tree of them, a kind of artistic sculpture tree holding cupcakes, in the gal’s second home, the British Airways Gold lounge at Heathrow terminal five.

There is a fear that Heathrow will not be able to cope during the forthcoming Olympics but I do not believe it.  I also can hardly believe that tickets to Olympics events are being printed in Fort Smith Arkansas, by Weldon, Williams and Lick, and airfreighted to London for £6 each.

The flags are coming from Lille, which is just a hop, skip and a jump away (in 1948, before Olympics were horribly commercialised, they forgot a British flag for the opening parade so Roger Bannister – later the first-ever four-minute miler – ran up to a nearby military office and borrowed one). 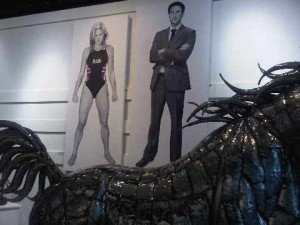 Sportspeople, inedible, on the wall of the airport's pop-up Expo Fine Art Gallery 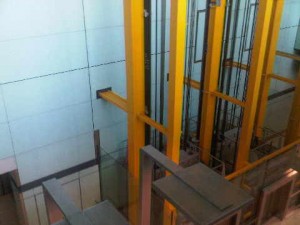 Modern airports are today’s equivalent of the amphitheatres of Roman times.  The best designers work to make them monuments for the future.  Heathrow’s terminal five, now incredibly five years old, is a Richard Rogers masterpiece (he who is married to Ruthie, co-founder of the fabulous River Café).

Structures are deliberately left showing nuts and bolts, with a few bold elements of colour. Most travellers never notice the architecture: they are besotted by Armani, Cavalli, Gucci and Harrods – or cupcakes. 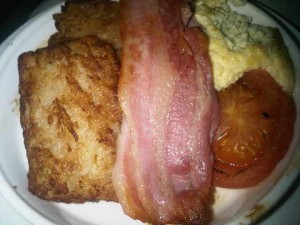 Fly away, to dine in the clouds, and sleep dreaming of luxury hotels in so many lands. Awake to breakfast, which is invariably themed for where you have just come from rather than where you are going to.

Having breakfasted off smoked salmon and Oscietra only what seems like yesterday, today it is full-English, including a sausage of Saddleback pork, a rare breed of black pig with pink front legs and waistcoat that traditionally comes from Wessex, in the mid-west of England. 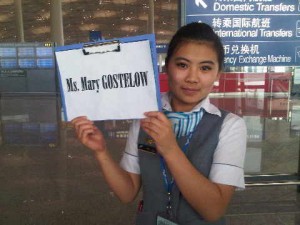 Luxury travel includes not only a luxury hotel but seamless airline flow.  Disembark, gal, time to get going.  Thanks to The Peninsula Beijing, the greeter, holding a card, is right by the plane’s door at Beijing Capital International Airport’s mammoth terminal three, built for the last Olympics, four years ago.

She pulls the Rimowa wheelie, and we walk through another impressive terminal, a soaring space – by Norman Foster – that in total is 20 percent larger than all of little Heathrow’s terminals combined.  This is the largest terminal in Asia, just over two miles long and thank goodness my greeter knew exactly where to go. 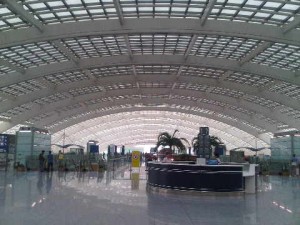 You deplane at one of 101 gates into an area that has a roof that outside looks like a dragon’s scales, all very lucky. You take a train and lots of people-movers, and land-side, beyond customs, you are in the train and ground transport area, which still seems to fly above you.

The hotel’s car was waiting, with today’s China Today and masses of mineral water. About 40 minutes later we arrive at the hotel.  Add 20 minutes for unpacking and ‘things’ and I am on my way, to head around the Forbidden City on one of the hotel’s bikes.  I am bidden farewell by a lucky dragon. Transport and sculpture.  And now to tour Beijing….