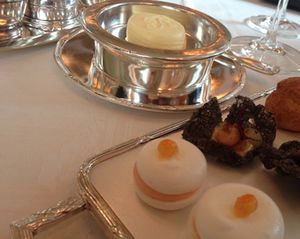 This is quite possibly one of the most gorgeous delicacies that the gal’s taste buds have ever encountered, namely a one-bite lemon macaroon filled with smoked salmon.  And where, you might justifiably ask, is this made-in-heaven aphrodisiac found?  At that great and iconic luxury hotel on London’s Piccadilly, The Ritz London. One wonders whether there was anything so simple, so tasty on the menu when the hotel was opened back in 1906?  Then, it was another of the select hotels founded by César Ritz, with his friend Auguste Escoffier, whose creations were much more complicated. 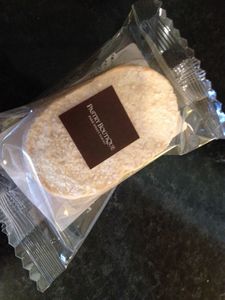 Macaroons, as I have written so many times before, are definitely the flavour of not only this month but every month. In Paris, I love what ‘macaroon king’ Pierre Hermé has available at Le Royal Monceau Raffles (where Oliver Stone stayed last week – did he eat macaroons while deciding what to do next, after directing Savages, with Mrs Kering, also known as Salma Hayek, and also starring John Travolta?).  In Kyoto, the strategically-lit Pierre Hermé lobby boutique at the new Ritz-Carlton Kyoto is mesmerizing.  In Tokyo, there are great macaroons at the just-opened Gourmet Shop in the airy atrium below Mandarin Oriental Tokyo, which runs the shop. 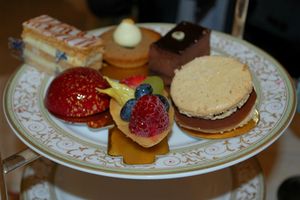 There are macaroons, too, on the menu at afternoon tea at The Ritz London, a leading-Leading Hotel.  This is one of the world’s great events, taking place five times a day, every day of the year.  There are sittings, 70 at a time, at 11.30 a.m., 1.30 p.m., 3.30 p.m., 5.30 p.m. and 7.30 p.m – the last presumably replacing dinner, so add in a glass of champagne.  You get your choice of tea in an elegant teapot, with real tea leaves (no bags, here) and a strainer – or, as at InterContinental Sydney with its ‘hot coffee’ special, you can have coffee instead. 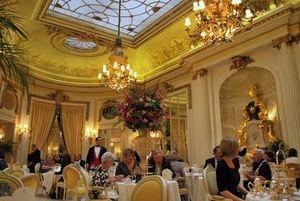 A double-stand holds goodies: macaroons, and sandwiches filled with smoked salmon, egg mayonnaise with salad cress, ham, chicken and mayonnaise, and cucumber slices.  You get home-made scones with home-made strawberry jam and clotted cream.  You get tea pastries and fresh cream cakes. Now as of today, March 31st, 2014, all this costs £45 a head, but do not think you can rush in quickly to save money (the cost rises to £47 a head from April 1st, 2014, and that is not an April Fool’s joke) – there is a waitlist of up to six weeks. 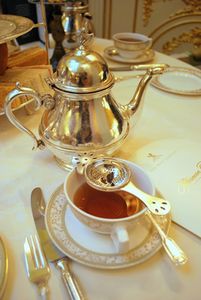 You dress up, to a certain extent.  The Ritz London is to be commended in retaining a strict dress code.  Jeans and sports shoes, and other sports gear. are simply not allowed – the late self-appointed food critic Michael Winner was from time to time incensed that they gave him a tie to put on when he was about to entertain at The Ritz.  Actually, I strongly approve of dress codes but in today’s world they apply more rigorously to men than to women.  Steve Jobs made a black polo neck seem passable, but Mark Zuckerberg has never done that for his hoodie, a grown-up’s equivalent of a toddler’s must-carry rag or shawl (did I say Zuckerberg is grown up?  Rephrase that…).   Anyway, at afternoon tea at The Ritz London there is music, and so much to see, as people are constantly parading up and down past you, from the compact arrival lobby through to the glorious restaurant.  You see real fashion, not à la Messieurs Jobs or Zuckerberg.  The Prince of Wales is not the only Royal to favour this hotel (he has granted the hotel his coveted Royal Warrant for banqueting and catering).  And on fashion, Christopher Bailey, CEO of Burberry, says the Prince ‘has impeccable style, marrying the real traditions of menswear with the relaxed attitude of his generation’.  His hats are from James Lock, his suits are made by Anderson & Sheppard (often using Johnstons of Elgin tweeds), his shoes are from John Lobb… 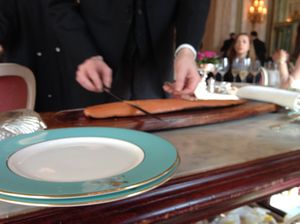 Smoked salmon carved at the table

The Ritz London is indeed a very fashionable luxury hotel, and just as John Lobb has been making HRH’s shoes since 1971, so some foods never go out of style.  Lunch or dine in the glorious, theatrical restaurant, its ceiling and walls an extravaganza of trompe l’oeil, and you find chef John Williams, celebrating his ten years here this very year, is stressing Arts de la Table, foods prepared table-side.  Try the smoked salmon, carved here by a skilled young waiter, and you know that real food is always in fashion.