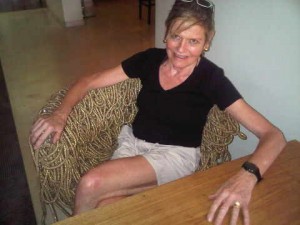 Tripadvisor has many detractors but on central São Paulo it seems to have it right.  Top hotel by far is the privately-owned Emiliano, on ultra-chic Oscar Freire street in the highly-expensive Jardins area.

The gal had heard about it, wanted to see it for herself, and posed happily in one of the hotel’s memorable Campana Brothers chairs in the lobby. Yes, it looks as if a ball of outsize gold knitting wool has been thrown over the metal frame.  Luxury lifestyle, dear. 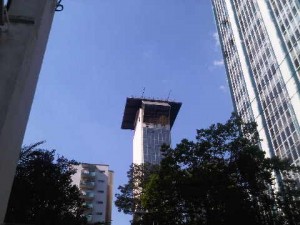 From afar, the Emiliano looks like a 23-floor sculpture with a square plate on top

The hotel, a 23-floor tower, is instantly recognisable.  It has a helicopter landing pad on its roof, and below that a two-floor glass box, angled out at 45-degrees, was formerly the spa, and now just about to open as the two top suites in São Paulo, one 1,200 sq ft with private pool, the other, which can be connected, 800 sq ft.

The whole building is only 40 feet wide.  Its owner, a construction giant named Carlos Alberto Filgueiras, planned it as apartments, changed his mind and it opened as a 57-room luxury hotel in 2001. Filgueiras’ charming son, Gustavo, an architect with an MBA in business management, runs the place (it is a Leading Hotel). 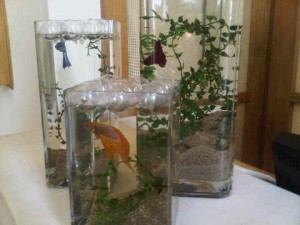 Three fish welcome you, at reception…..

People love the hotel for its people, all 200 of them (Brazilian charm personified).  They love it for its quirkiness. Three fish, as well as three Miss Brazil With Brains, greet you at front desk.

One offers a glass of Mumm Champagne.  This hotel is so generous no-one minds that it has by far the highest average rate in town.  Suites come with a bottle of good wine, complimentary pressing and much more.

Everyone gets superb free WiFi, which even works on the outside terrace.  Anyone can take their own wine into the restaurant, with no corkage charged for the first bottle. 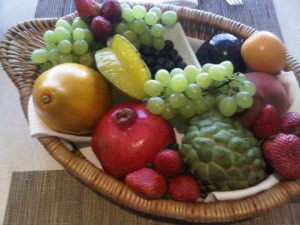 … and there is fruit (and wine) in the suite

The outside, and interiors, are the work of designer Arthur Casas.  He loves mottled-wood walls and matching shelves, and stark tables that are C-shapes of thin marble.

Washbasins are rectangular slabs of Carrara marble (bath-tubs fortunately are classic-cast iron, with ball feet). Suite 1601, which occupies the entire width of the building, has all-wall shaded glass windows (they open!) looking down at the fashionistas on Oscar Freire. 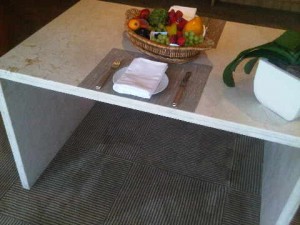 A big sliding door, Japanese style, can cut off the bedroom area.  This is a room for connoisseurs.  You have a Francis-Francis espresso machine and four types of Champagne in chilled refrigerator drawers.

Continental breakfast is included in suite rates, and a table was thoughtfully set in 1601, awaiting our early arrival from the airport. The freshest of juices comes with a straw.

There are wrapped tropical fruits, and cold cuts, with two cheeses plus a cream cheese spread, and the hotel’s own jams (they also do their own bathroom toiletries, by the way). 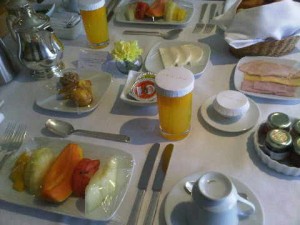 For early arrivals, continental breakfast awaits in the suite

The croissants are the best since those that Pierre Hermès makes at the Royal Monceau in Paris.   Filgueiras-style is, well, style, with a smile.  The family maxim is that generosity pays.

Dine in the hotel’s restaurant and you are brought a complimentary glass of welcome Perrier-Jouët, and tiny half-bite cheese puffs.

I handed over the bottle that had been waiting in our suite, a very presentable Vale da Mina 2008 Van Zeller & Co Alentejo, and it was served with the same aplomb as if we had chosen to buy the most expensive wine on sommelier Gianni’s amazing (Wine Spectator Award 2012 list), namely Petrus 2001, priced at R15,439. 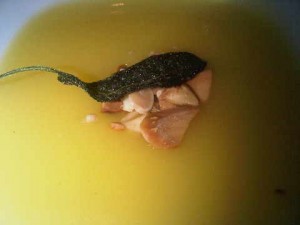 An amuse soup, with almonds and a green leaf, in the restaurant

We preceded the meal with superb home-made breads, including lemon, and orange, flavours, to go with cream cheese, butter, onion marmalade or olive oil.

An amuse soup followed, before finally proceeding to Poached egg on sardine fillets on toast, followed by Olive oil-marinated octopus. Local gourmets confirm that chef José Barattino is the best in town.

The dining room itself is a giant squash court with an entire living wall, 25 feet high, that automatically waters itself at 1600 every day. 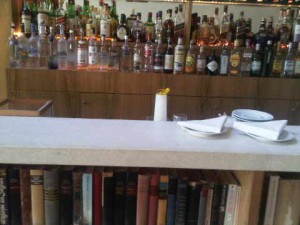 Below the bar counter is the hotel’s eclectic library

From most tables you can either see directly, or reflected via a ceiling-high mirror, the television in the neighbouring sports bar.  Charlie Chaplin’s silent City Lights screened as we dined.

The main bar, in the corridor from restaurant to lobby, cleverly has the hotel library just underneath.  There is another living wall along this corridor, this one with white orchid plants in front that are so copious they must have been infused with Viagra. 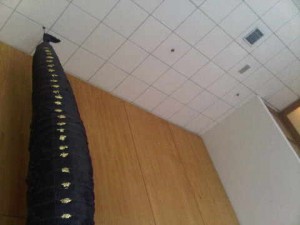 Totally unnecessary (it is ART, darling), a giant gold-dotted ‘slug’ hangs from the lobby ceiling

Back near the reception desk, a 13-foot hanging papier-maché shape, with gold bits on it. A one-off artwork by Siron Franco, it looks remarkably like an oversized slug, but memorable.

Walk round behind it and a table-look shape attached to the wall near the two elevators has a mirror infilling its whole area.  Come out of the elevator and you see your Manolos or Nikes.