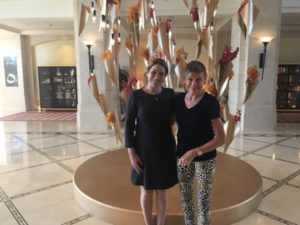 After an absence of 12 years, the gal returned to Amman, to revisit two favourite hotels and make two new friends. (There is a daily flight between Tel Aviv and Amman, Royal Jordanian’s Embraer service, all of 25 minutes in the air so the seat belt sign never goes off.) Four Seasons Hotel Amman is the top-performing hotel in town, with rates that are currently double those of any other hotel, and at least some of the income must surely go on flowers. No, this is not Jeff Leatham creative art, as seen at Four Seasons George V in Paris and so many other Four Seasons. As the Hotel Manager Mali Carow says, this luxury hotel deliberately wants to be different – the flowers in the lobby currently include a ceiling-hung cascade chandelier of fresh blooms. 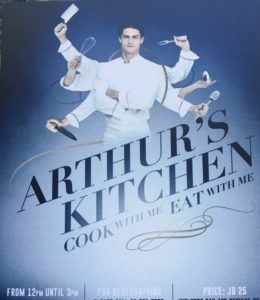 I MUST visit Arthur’s Kitchen…

Actually Jordan is a veritable produce garden of flowers and the most marvellous fruits and vegetables – I had mouth-watering figs, and fig jam, as part of my welcome. The fruit displays on Olea buffet were beaten only by the variety of smoked fish, and local lebaneh and other savoury items. At La Capitale Brasserie the cauliflower was so tasty I asked for more (is cauliflower the new avocado or kale, perhaps?). At La Capitale. Mali shared the story. What had been three adjacent areas, bar and two restaurants, were not working and it was her task to come up with something as replacement. My longtime New Zealander friend Mark Ancrum, who is now living in Amman, says La Capitale is his favourite in town and since he is an inveterate foodie, and food professional, that is high praise. AvroKO, the cult New York-based company that has done some of the best ambiences in eating today, had already been commissioned to weave their creative magic here at Four Seasons Amman. 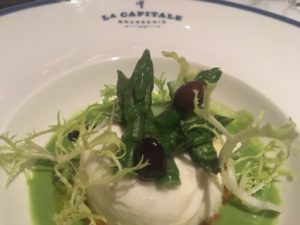 So Mali Carow supervised making one long space, with end bar, and a variety of seating, and a big show kitchen. She somehow found the amazing Arthur Vonderheyden, a Frenchman from Bordeaux who I think escaped from Cirque du Soleil – the poster, above right, is in the hotel’s elevators and announces his weekly cooking classes, every Tuesday. His regular menu is pure brasserie, with lots of changing versions of daily regulars, like burrata of the day, here with asparagus, and quiche, and soup of the day. We drank JR Reserve 2014 Shiraz Jordan River from Jordan’s Northern Highlands and Mafraq Plateau: the country’s wines have improved beyond all recognition since my last visit. 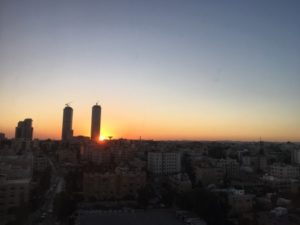 There will be fascinating drinks, too, in SIRR below , a new inner-sanctum bar that the hotel opens next month (the space was formerly washrooms) – next visit, I might try a Churchill martini, my choice of gin with SIRR’s own-made herbal tincture. But overall, the main take-away from this luxury hotel is the sheer charm and genuine professionalism of all the staff. Although hotels can have at least nine per cent of their workforce brought in, here the 197-room hotel has only seven expats among a team of 400. Other great memories include, here, the lovely pools, indoor and out, and, oh so Four Seasons!, the fact that when I asked if I could get into the Citterio-Technogym half an hour ahead of its stated 6 a.m. opening, I found, at 5.30 a.m., that the fitness man had come in early, unasked. NOW SEE A VIDEO, BELOW, OF ROOM 1205.