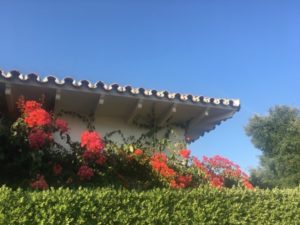 Look up, at a Finca Cortesin rooftop…

The gal was so busy writing that the car passed from Portugal to Spain seamlessly, without a noticeable border. Four and a half hours after leaving Vilamoura the destination was reached, Finca Cortesin Hotel, Spa & Golf, a paradise that Javier Lopez has created on 480 acres of rolling countryside near Casares. When he first came here, apparently, there was only one tree on this land, a carob: now, surrounded by lush greenery it is still here, near the entrance to the luxury resort (and carob is its logo). Look up at the sprawling, three-floor resort and you see what looks like a centuries-old palace, lovingly maintained. No-one would guess that it only opened in 2008. 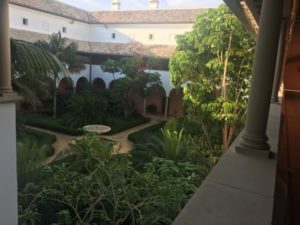 .. or down, into a courtyard

I was in suite 38, entered from an open-sided inner courtyard – see the photo on the right. I looked out over the surrounding countryside (shown in the video below). I loved the simplicity of the suite’s design, with the coral-patterned taupe fabric of the curtains echoed in specially-commissioned displayed paintings showing the same orange, or white, coral sprigs. Cleverly, a six-foot-high Japanese kimono rack is decoration by day but at night turndown it is used to store the patchwork of silky taupe fabrics that forms a comforter, here called a plaid, at the end of the enormous bed. It was all very elegant – I even had Marques de Riscal wines in, and by, the minibar. 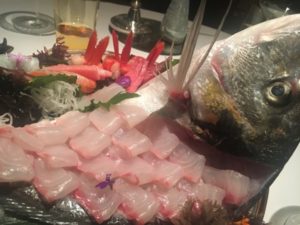 Many have an early breakfast here, to head out to play the Cabell Robinson golf course or have lessons at the Jack Nicklaus Academy. The sensible then come back for a session in the spa before a drink on the bar’s terrace – listening to the band, above – and dining, perhaps in Kabuki Raw. This is a branch of the Kabuki group, founded by Ricardo Sanz, that is justifiably popular throughout Spain, so it attracts not only the domestic market to come and stay here (Spaniards make uo nine percent of the overall rooms market, which is led by the UK, at 31%) but also local residents to come and eat here – they constitute 50% of all diners at the 50-seat Kabuki Raw. We had a superb dinner, including a truly memorable sashimi plate. 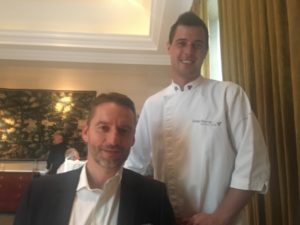 René Zimmer has been at this luxury hotel since before it opened and he is tremendously proud of his restaurants. It makes such a difference, he says, having a chef, Luis Olarra, who is not only a skilled culinarian – Kabui Raw has retained its Michelin star since 2015 – but is also unbelievably charming. This is undoubtedly one reason why car companies, and beauty giants, like to launch products here. Of course they also like the opportunity of staying in one of the gorgeous 67 bedrooms or suites, which are complemented by four four-bedroom standalone villas. See a video of suite 38, in the main house, below.