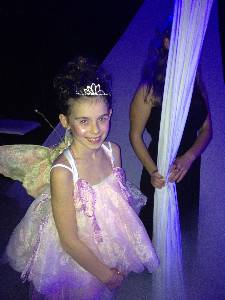 Waiting to go on, or above, stage at the Carlton InterContinental

Cannes’ annual International Luxury Travel Market (ILTM) is the busiest week in the diary for over 3,000 luxury travel providers from all over the world, and yet its organisers cannot flop down at the end of it all.

Simon Mayle, organiser and Reed’s marketing guru, is heading off next week to start planning Mexico, for ILTM Americas next September.   ILTM director Alison Gilmore has to work out how she can cover both that, in Mayakoba, and the new ILTM Spa, in London at the same time…

And the givers of the ILTM parties have to start thinking how they can be even better next year – but, asks the gal, is that possible?  At the Carlton InterContinental, IHG’s Gillian Greenwood throws a final-night party for the Intercon brand’s top travel agent partners.  Last year she had a real horse. 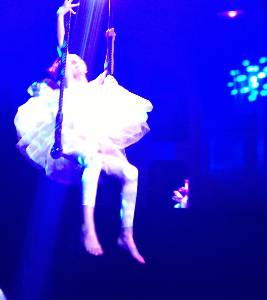 This year, she had an acrobatic troupe that would have even made Princess Stephanie, a lover of acrobats and circus life, yell ‘bravo’. This particular acrobat troupe includes young fairies, gorgeous little ladies in palest pink tulle and tutus.

As smoke (or was it dry ice?) rushed up from the floor, making it look as though the guests around you started from the knees up, these little ladies flew overhead, twirling and smiling at the same time.

There was a male singer in a white satin suit but I did not recognise him, though it was quite clear it was not Psy, who anyway was performing in Singapore, giving a free Gangnam show that Sheldon Adelson paid for at his Marina Bay Sands. 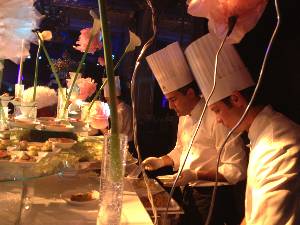 The more I talk to American travel agents, the more I learn how important food is to them – and their clients.  How was that particular cruise, one asks another.  The answer includes thoughts on food, within the first two minutes.

The Carlton InterCon chefs know this, and they produced delectable little one-biters, making some of them on-site to be displayed, with others brought from the kitchen, on lifesize trees sculptures adorned with hundreds of supporting ledges, just right to show off the dishes.

A thought: if everyone had ten dishes, as I did, and there were 300 people there, that makes 3,000 dishes to wash up – plus the glasses and holding plates, sensibly with extensions to hold your glass. 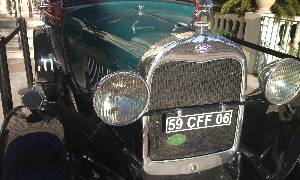 A 1929 Ford stands, guard of honour, in front of the Carlton

The Carlton celebrates its centenary in 2013 – although construction actually started two years earlier. Among its many claims to fame over the years is that the Hitchcock movie To Catch a Thief was shot here, starring Cary Grant and Grace Kelly, and while the latter was staying here during the 1955 Cannes Film Festival she arranged a meeting with Prince Rainier which led to their marriage a year later.

The hotel is one of the Riviera’s icons (is it true that its two roof domes were designed to resemble the breasts of La Belle Otero, courtesan Caroline Otero, at work in the area when the hotel was constructed?)  Today, it gleams and glistens outside, and in front of its main entrance is an equally-sparkling 1929 Ford. 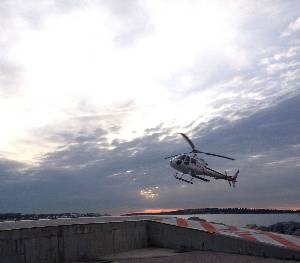 During my week on the Riviera I did get out of Cannes, to Antibes and to Nice, and for a memorable lunch in St-Raphael (‘so much more elegant than Fréjus and far less Russian than St-Tropez’).

The rest of the time I was here, ILTM and all that was associated with it.  In the past I have been driven by red Ferrari and by yellow Lamborghini.   This time I had a Mercedes people-carrier, black with black windows, and two feet – mine.

The glorious finale, however, was a chopper.  Oh what a way to leave.  With Kevin (recognisable by his Gucci-banded baseball cap) and Amy and Audrey, all of them top US travel agents, I was driven to Cannes’ helicopter landing pad. 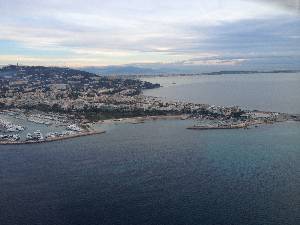 ..and we fly away from Cannes, over the Casino where the gal ran a few hours earlier

As we flew off, back to Nice, I was able to look down at the Casino Palm Beach at Place Franklin Roosevelt, where I had been running four hours before.

We hovered over Antibes, where we had lunched at that glorious luxury hotel, Hotel du Cap-Eden-Roc, and ten minutes later we were down at Nice airport, to transfer to scheduled flights for our journeys home.  Now where next, gal?