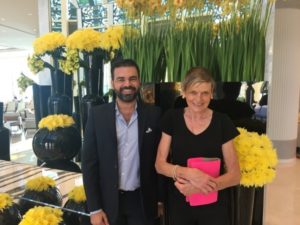 Four Seasons Hotel Abu Dhabi at Maryah Island is a magnificent success story, from Day One (which was May 6th, 2016). And the chapters of this luxury hotel continue to unfold. The latest revelation is Chicago Butcher & Still Steak Est(ablished) 2015, in other words a fantastic and gorgeous steak house, designed by AvrOko. Colourful butcher-chef Marshal Röth and equally characterful manager Leila Cooper were both, separately, enticed to make their first-ever working foray outside the USA. The gal, dining with George Chapides, felt this was ‘their’ restaurant rather than just another hotel dining place. But then everyone involved with the hotel exudes a passion of ownership. 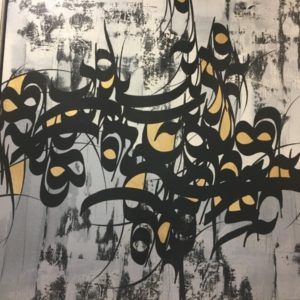 Take George, a fascinating Greek Cypriot who, as well as being grandson of a near-beatified erudite monk and father of the ‘next Rafa Nadal’ – or, more relevant, tennis star Marcos Baghdatis, who is of course Greek Cypriot – is, in his own right, such a highly-skilled engineer that it seems no Four Seasons hotel can open, or manage, without him (he is also renowned for his conversational and sartorial acumen). He showed me around some of the dozens of stunning art works, chosen by Art Advisory Service, after which I escaped, to hike across newly-opened Bridge No 4, immediately outside the hotel, so that I could look back at the skyline. See above: the 33-floor hotel, surrounded by a display of coloured vertical poles – architect is PLP – is on the far left, and the Cleveland Clinic is on the right. 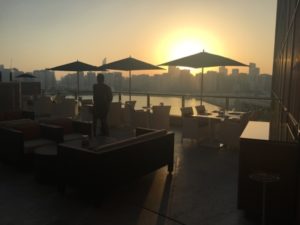 Sunset from a terrace

I then passed two Joe O’Connell sculptures, both called As Above So Below, before going back into the hotel. Its gleaming white lobby has a seven-tier upper frieze suggesting rippling waves. Out on a terrace I watched the sun set over the silk-still water. I got ready for dinner, to taste two of Marshal Röth’s signatures, bone halves filled with marrow, and served with addictive home-made garlic jam, and then his 1,500-gram tomahawk ribeye on the bone, from Creekstone Farms in Arkansas City, Kansas. No, there was then no room for chef’s grandmother’s key lime pie (I need a reason to return). 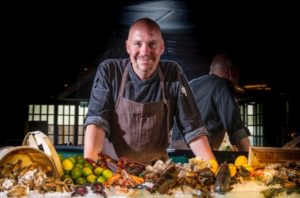 What makes a luxury hotel? I asked myself yet again, this time as my breakfast coffee was brought on a tray with tall silver sides. Back up in suite 617, I noticed yet again the elaborate hairdryer bits and pieces, with curling tongs, and I ran my hands again over the silk smooth coat hangers (gosh, is this becoming a fetish?). SEE THE VIDEO BELOW FOR A TOUR OF SUITE 617. While waiting for my pickup I did some more art-gazing, mindful of the fact that for the top affluent one percent of American travellers, today, apparently art-gazing is now as important as food tasting. One of the displays in the lobby here are Ashwaq Abdulla’s seven bronze sculptures representing the Emirates. For Ras Al Khaimah, where I was only 24 hours ago, there is stylized likeness of Jebal Jais, that highest-mountain in the UAE. Luxury is a hotel that offers ultimate style with a sense of locale.