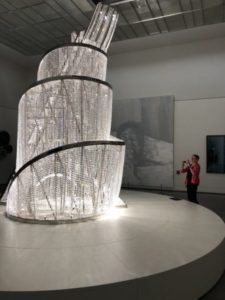 First, the gal must confess. Louvre Abu Dhabi, ten minutes from such luxury hotels as, in order of proximity, St Regis Saadiyat Island, Pearl Rotana and Park Hyatt Abu Dhabi, is stupendous.  It vastly exceeded expectations (anyone who has seen Sofitel Vienna Stephansdom, the one with black, or white, or grey bathrooms and a roof based roughly on Vienna’s gorgeous Dom, might be sceptical about the name Jean Nouvel, but here the artist has come up trumps). The gigantic fretwork saucepan lid of aluminium that covers the whole area is in such contrast to the water and sand all around.  Juxtaposition is, indeed, the key word for the whole effect of this long-awaited architectural masterpiece, which opened November 8th, 2017. Judging by the Olympic-scale proportions of roads and parking spaces, the authorities obviously expected the appeal of Madison Square Garden from day one 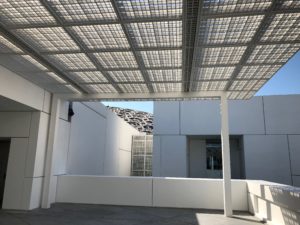 One of a myriad of Louvre vistas

The space is so large there is plenty of room for all but do avoid coinciding with a mega cruise ship as the cruise terminal is literally next door. Louvre Abu Dhabi comes into Abu Dhabi’s total $27 billion budget for Saadiyat Island, of which about $600 million was invested in the building and a further $525 million was paid for use of the Louvre name (and yet an additional $747 million is allocated for art loans). Frankly, during my visit I was most impressed by the architecture – see a video below – and by a temporary exhibition, finishing June 3rd, 2018, on globes and old maps. The more-permanent displays merely present a Neil MacGregor-type history of the world in 100 objects.  I did, however, love the unique 13-foot Fountain of Light crystal chandelier and steel sculpture by the perennially-young Ai Weiwei, now all of 60. 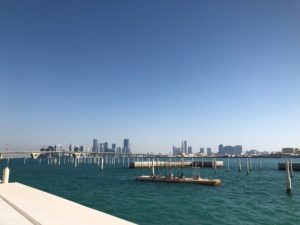 View from a Louvre terrace

Back to hotels. I always relish meeting youngsters who will one day be running significant properties.  It seems only a few years ago, for instance, that the gal, stupidly wearing shiny-soled boots in a snowstorm in Moscow, had to be stopped from sliding over Red Square by a young Greek, Mattheos (Aki) Georgiou at Ararat Park Hyatt.  He is now GM of Andaz Munich Schwabinger Tor, opening later this year. Now cut to Abu Dhabi, where that Emirate’s luxury Park Hyatt is currently without a GM but, as with all good establishments, the team is so well trained that Hopes For The Future are able to show what they can do, and beautifully. During my stay I was looked after magnificently by another Greek, or half-Greek – Andrew Kakakuts is also half Ukrainian. Non-stop travellers have continual little needs. Help, what about this stain on my shoe?  No problem. Andrew Kakakuts and Filipina assiistant housekeeper Aireen, assembled their team of chemical experts. 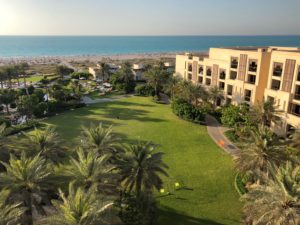 I love dining here at Park Hyatt Abu Dhabi, both in the on-the-sand Beach House and, our choice tonight, Park Grill.  I was with a Frenchman Julien Gonzalvez, who after years in Asia has come here to open Grand Hyatt Abu Dhabi.  In his honour, we drank Monier de la Sizeranne Hermitage 2012 M Chapoutier, to go with local tuna followed by Irish beef from John Stone, part of the mighty Kepak Group. At the enormous Le Café breakfast buffet, some of those vacationers headed straight for a table of croissants and bread-and-butter and other puddings but I was happy to see masses of papaya. You can be super-healthy here: use the 24/7 Technogym, run the mile or more of beach, swim what seems like acres of outdoor pools, use stairs (24 down to the gym, 27 every time you eschew elevators to go between lobby and the outside area). AND NOW SEE VIDEOS OF INSIDE THE LOUVRE, OUTSIDE THE HOTEL, SUITE 603 AND BREAKFAST IN LE CAFE