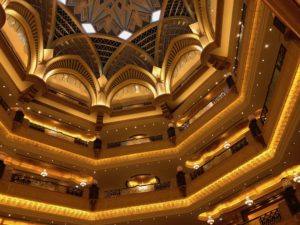 Looking up in the main dome

Back in Abu Dhabi, the senior of the seven Emirates that constitute the UAE, the gal was immediately immersed in the ultimate in contrasts that Emirates Palace Kempinski presents. First, size. The entire building is, in a straight line, a kilometre long, and it has a total of 7,200 doors, inside and out, with 114 elevators, and 77 interior shops. At the same time the painters, directed at the 2005 opening by designers KY&A, appear to have used only one colour, soft sand.  By contrast with the size, there is minimalism.  Signage throughout the entire structure is subtle gold, presumably at least 18 carat, which means that, when letters are set on sand-coloured walls, you can hardly see them. 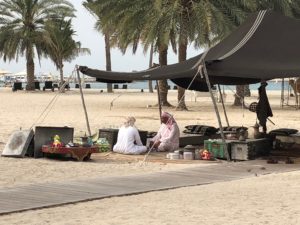 Looking out at the beach

It took me at least 24 hours to learn how not to get lost (sometimes it is quicker to go outside, walk along some of the mile-long private beach promenade, and then back inside again). I did, naturally, quickly find my way to one of two identical gyms, both 24/7 and extremely well equipped. More minimalism: I always think of Arabic mezze starters as a pot-pourri of dozens of platters, enough to feed five thousand.  Here, at the local-Emirati Mezlai restaurant, a single Villeroy & Boch dinner plate bears five tiny dishes with hommus and so on – which is of course avoiding food waste.  I had earlier worked up a good appetite by walking from end to end and round the cricket pitch and golf course, which are one and the same.  I passed the Bedouin tent, where locals explain their camels to fascinated child guests. 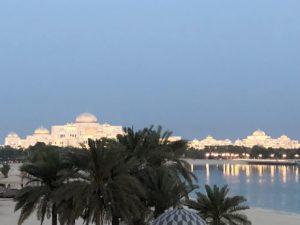 Looking across at the royal palace

This 394-room hotel is actually very child friendly: off one end of the building are two mammoth water chutes, one red and one yellow, and a wild water stream.   It is also going after culture.  Its mammoth theatre next hosts, on April 20th, 2018, the Donetsk Opera and Ballet, presented by Flash on behalf of Abu Dhabi Culture & Tourism: star of the evening will be Abu Dhabi’s own prima ballerina, Alia Al Neyadi, 24, originally inspired by her Ukrainian mother, Svetlana  (Alia then went on to get her Masters at New York University Tisch School of the Arts).  As I walked the grounds, here, I looked along at the Emir’s palace. I also admired some of the popup Balance sculptures, including a dancing horse, above.  This time, sadly, there was no time to admire the hotel’s unique and ongoing ATM that serves up real gold charms, real time pricing, day by day. 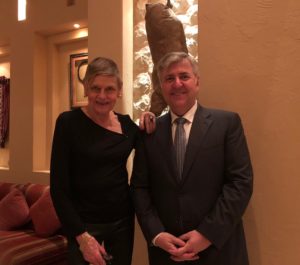 I was pleased to see what a great job someone has done selling this luxury hotel as a tourist destination – experienced Germans, especially, seem to like coming here time and time again, merely to stretch out on the beaches, with bikinis and books, a world away from the local VIPs in dishdashes gliding through the acres of cool polished-marble hallways. I also met up with the recently-arrived Argentinian GM, Martin Cramer, who has been in the Middle East for several years.  Ramadan, which starts this year on May 15th, 2018, does not faze him at all.  His teams are putting up a 700-person tent on the beach, for nightly Iftar parties.  Very conveniently, Ramadan finishes June 14th, just as the World Cup starts.  Abu Dhabi is football crazy (it owns Manchester City, for a start) and that tent will get even noisier when it turns into a non-stop sports bar, but honestly, Emirates Palace Kempinski is just so enormous that no-one else will hear, let alone complain. NOW SEE FIRST THE LOBBY AND THEN A VIDEO OF SUITE 3320