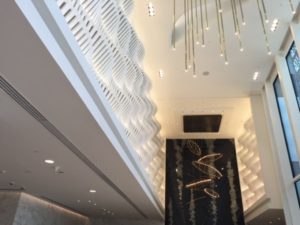 Looking along wave-like ‘fringes’ in the lobby

From future hotels in Tbilisi, Georgia, to future hotels in Abu Dhabi, UAE, the gal continues her tour of luxury properties around the world. Four Seasons Hotel Abu Dhabi at Maryah Island has had a gestation period longer than an elephant. It was announced years back, and stopped and started a couple of times. Now, as part of the giant Maryah Island complex, which includes the stunning Cleveland Clinic, it is all ready to open, May 5th, 2016. From a distance (see Andrea Greybanks looking at it, above) it seems like a red-hued 34-floor tower, but look closer and you see that the exterior is clad in vertical multi-coloured aluminium rods to evoke memories of hanging Arabic textiles.Inside, the two floor lobby has upper fringes as reminders of shifting sands across the endless desert that gave birth to the UAE and its oil, and thus its riches and current lifestyle. The lobby of this 200-room hotel, which occupies floors four to 13 of the building, will be filled with some of the 2,000 pieces of stunning sculpture, and other art, chosen by the Art Advisory Group’s Nancy Sweeney, from Denver. There is art in the bedrooms, too, and being Four Seasons there are luxury details, like embossed leather covers, all matching, for notepads, tissue covers and garbage pails – and to show internationalism, toiletries are Salvatore Ferragamo. 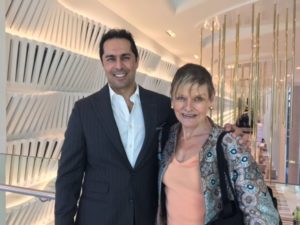 Children checking in with their parents, by the way, will be greeted by a pint-sized white Range Rover that is driven in to the lobby. It is filled with presents, for them to choose. The eyes of GM Sam Ioannidis – real name Sarantos – light up with enthusiasm, as they do, too, when he shows his lobby lounge, with constantly-changing coloured ceiling, a sculpture of Lasvit crystal. He offers visitors a glass of Taittinger, brut or rosé: this is a born food and drink person, who dared to leave Four Seasons to run his own restaurant, in Toronto, until Four Seasons’ Klaus Trenter, in one of the cleverest of his brilliant career actions, took him back. 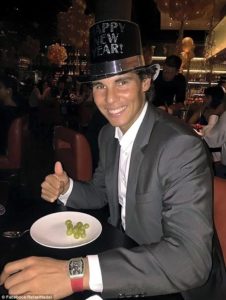 Stay at the luxury Four Seasons hotel and you have a sleek silver bar, appropriately called Zsa Zsa, plus an Adam Tihany-designed Italian restaurant, and a US steakhouse, by Greg Bradshaw, Adam Farmerie, William Harris and Kristina O’Neal of AvroKO. From the hotel, you can walk, inside, past The Galleria‘s 130 stores, to the Cleveland Clinic, and 25 other restaurants, including the Emirate’s top, Zuma. Friends of mine were there last New Year, found Rafael Nadal at the next table and everyone was dancing with everyone at midnight. Who will be in town this coming New Year, I wonder? Some of the best views of the annual fireworks – see the video below – will be undoubtedly from the rooms of Four Seasons Hotel Abu Dhabi at Maryah Island. Were I there, which sadly I cannot be, I would order up a chilled bottle of Taittinger Comtes de Champagne, with a copious supply of the UAE’s own outstanding caviar, Emirates AquaTech.