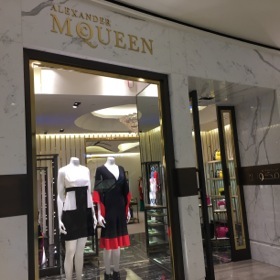 The Galleria has fabulous stores…

There is just so much going on in Abu Dhabi. Take the shopping, with three stunning floors at the Galleria on Maryah Island. The Emirate’s current long roster of luxury hotels will soon have more companions, and more competition, says the gal. Four Seasons, under GM Sam Ioannidis, opens next to the Galleria – and to Rosewood. Rixos and Rotana are among those heading to Saadiyat Island. Stuart Deeson, who did such a brilliant job opening Park Hyatt Abu Dhabi on Saadiyat Island has moved to the mainland, where he will be opening Grand Hyatt Abu Dhabi, next to Jumeirah at Etihad Towers. 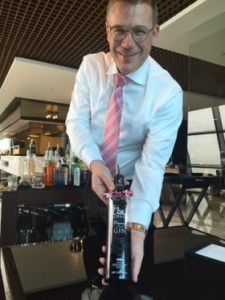 .. and Stefan Fuchs has lots of gins

Talking of Jumeirah Etihad Towers, Stefan Fuchs is now very much in charge here. He has brought in Ray’s Steak House (why Ray’s? A nice mid-West name, which goes with great meats, although here he has Australian Wagyu, and Irish, from John Stone). There is an oh-so-trendy gin trolley, with a William Chase bottle tied with a Union Jack. Love that. William Chase is a 50-year old English farmer who started making some of his potatoes into crisps (chips). He called them Tyrells, sold the brand to Langholm Capital private equity for £40 million, and used other potatoes for vodka before extending into gin. Stefan Fuchs has lots of ideas to jolly up hotel restaurants, by the way. 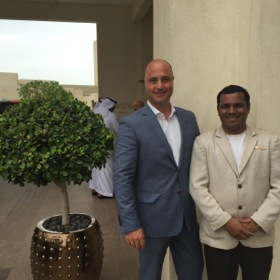 Federico Mantoani with one of his happy team members

At the 306-room Park Hyatt Abu Dhabi, where Venetian Federico Mantoani is now in charge, the lovely casual on-the-beach Beach House is being extended – sit on the terrace and overlook the dunes. That very afternoon, he was announcing to his 525-strong workforce that they are best in the Hyatt network, for customer satisfaction and general productivity and efficiency (as it happened, his previous hotel, Hyatt Regency Delhi Gurgaon won Hyatt’s community service award, for supporting a woman who teaches street children). No wonder the staff at Park Hyatt Abu Dhabi beam. 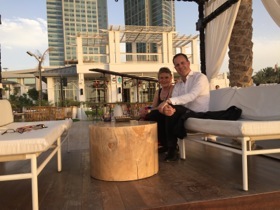 Having a beach in Abu Dhabi certainly elevates specific luxury hotels. Down ‘between the bridges’, Fairmont Bab Al Bahr has a beautiful beach. The Maryah and Saadiyat Island hotels also have beaches, as do Jumeirah at Etihad Towers, Emirates Palace, and the hotels along the Corniche. The Corniche has been dramatically changed – I cycled along it, on one of Hilton Abu Dhabi‘s gorgeous Scott bikes, and honestly could not find the old Sheraton Abu Dhabi. It is almost as if the new Corniche road and park has sidelined it. The two pre-eminent Corniche hotels now seem to be the gorgeously friendly and ever-so-popular venerable Hilton (which has extended its beach, where you can order food via bar-coded loungers, by 3,500 sq ft) and, next door, the year-old St Regis Abu Dhabi, which has just opened an Asia da Cuba beach facility.