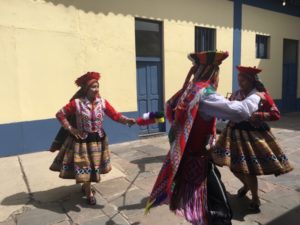 Laurent Carrasset, Belmond’s Man In Peru, says that once he has finished his MBA he feels he will have the necessary attributes to run any kind of company. Similarly, when a luxury hotel company of the calibre and reputation of Belmond diverts slightly to trains it can do a jolly good job. Okay, it has been running trains for decades, the original Orient-Express in Europe, the Eastern & Oriental between Bangkok and Singapore, and now a train in Ireland, and it has operated the Hiram Bingham in Peru for years). But its two month-old Belmond Andean Explorer, emblazoned with the chakana cross of the Incas, sets a new and higher tone, says the gal, and now, as of this week, even has a dedicated spa carriage along for the ride. The journey started in Cusco, for the three-day trip to Arequipa via Lake Titicaca, and, as will be seen, there were to be continual highlights. The train had only arrived back in Cusco at 8.45 that morning and by 10.30 there were already 40 passengers arriving for the 11 a.m. departure. 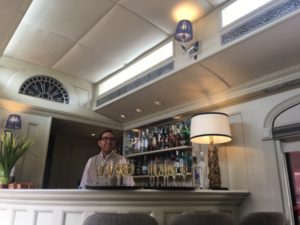 Welcome aboard (one of two bars)

While waiting to board we were entertained with coffee, strawberry juice, dancers and some extraordinarily good local musicians – see the video below. At 10.50 we were invited into the piano bar car, where the baby-grand was tinkling. Belmond Andean Explorer is absolutely all-inclusive, which means any of the drinks shown in the photo to the right and a myriad more besides, but now it was glasses of an extraordinarily acceptable, and icy cold, Juvé & Camps Cinta Púrpura Reserva 2013. Then we were escorted to our cabins – see my two windows, in the photo above. The carriages are all just under 67 feet long, and some have two, some three and some four cabins. There are, in all, 24 double guest cabins, which take up eight of the total-17 carriage count (two more carriages accommodate the 20 onboard staff, who include a nurse). The train had been designed and built in Queensland for an eight-day Australian run, which did not work, so the rolling stock was shipped to Peru, adjusted as necessary, and South African Inge Moore was asked to do the interiors. 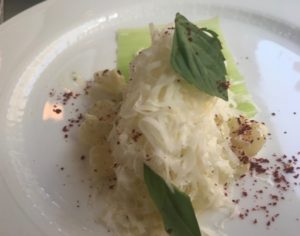 But trains are trains and, like cruise and river ships, and private yachts, space is at a premium. Despite having left half of my already minimal gear back in Lima, and being one of only three singles aboard, there was a momentary panic. Where to put everything? In fact, as I found last time on Seven Seas Navigator, there was ten times more storage than I needed (memo to anyone coming on Belmond Andean Explorer, all you need are sneakers, layers of clothes and a lightweight parka, and add to this a heavyweight appetite). A simple programme card announced a light lunch, in either of two dining cars – it was a set meal, starting with a Peruvian street-food, choclo con queso, corn with cheese. Menus are overseen by Diego Muñoz, formerly with Gaston & Astrid. All the food, for a return trip, is prepped at Belmond Monasterio in Cusco. I was really impressed by my first tastes, which included a delectable wafer bread inset with Andean seaweed. No-one had said this would be such a gourmet experience. 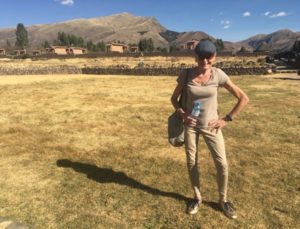 There is a Mexican family of 12 aboard, the majority of guests are Spanish-speaking and Christopher Mendoza, the onboard train manager who says he ‘won’ the job in a competition open to all Belmond’s luxury hotels’ managers in Peru, has sensibly allocated the few English speakers into one tour group. We got into small buses, which had followed us from Cusco, for our first tourist stop, at Raqchi, a gigantic Inca settlement which still has standing stone and mud ruins soaring over 30 feet up, and remains of wood-free houses, and 166 circular stone warehouses. Next, back home aboard, we went on up to our highest point, La Raya, over 11,000 feet ASL. It was time for afternoon tea – altitude-helping muña, mint, tea in my case. This was followed shortly by drinks in the piano bar and dinner, when they kindly made me a salad with avocado in place of the stated tortellini, and the following duck breast was magnificent. Now to bed… BUT DO SEE THE VIDEO OF OUR SEND-OFF