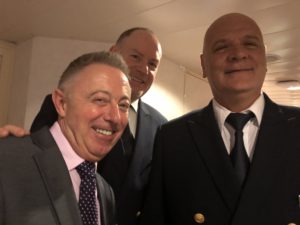 Just as luxury hotels are increasingly experience hubs that happen to have bedrooms and a myriad other facilities, so cruise ships are about much more than getting from A to B. The gal finds RSSC Navigator the perfect venue for keeping fit, be it walking the 11th deck circuit, as above, or, if the weather is bad, the more-protected tenth deck. There are also so many staircases to complement elevators (it is 15 carpeted steps from one deck to the next). Of course there is a gym. All this is necessary to combat eating and drinking, which can be continual. One night there was a block party. Take a glass from your suite, go out to the corridor to have it filled, by a butler, and meet your neighbours, while top management processes around the ship. 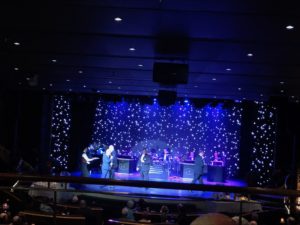 Looking down at the stage, Society party

Our corridor was visited, albeit briefly, by the Captain, Atanas Kostadinov, the General Manager, Michael Coghlan, and the Cruise Director, Paul Reynolds – who got quite a lot of exercise trying to cover the entire ship as fast as they could. The second night’s welcome party, and a subsequent loyalists’ cocktail, honoring Seven Seasons Society members on this, the 25th year of what is now Regent Seven Seas Cruises, were less strenuous for them. At the Society party the Captain spoke, as did Cruise Consultant Bruce Van Rooyen, a South African who speaks Thai and lives in Phuket. 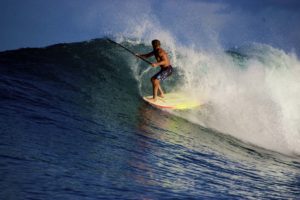 One night I really enjoyed an old-fashioned poporn movie session. Help yourself to big paper cups of popcorn, lie back in one of the comfy chairs in the tiered theatre and try not to fall asleep…   It was Take Every Wave: the life of Laird Hamilton, one of the best-known surfers of all time. From all-time rebel youngster to, one hopes, a now-settled 54 year old, he has along the way not only surfed most of the world’s best waves, right up to 70 feet high, and co-invented tow-in surfing, but he is a fashion and action-sports model (he’s married to professional volleyball player Gabrielle Reece). 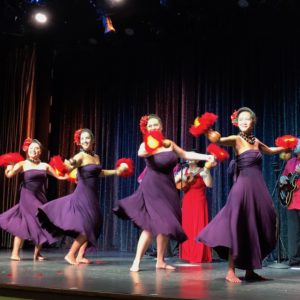 Another night we had a live Hawaiian culture show, Hālau Nā Lei Kaumaka o Uka, which was so good it illustrated how appalling most such mu-mu and hula-hula tourist performances are. With a first-class female vocalist as compère and ukulele player, and two good male back-up voices, playing guitars, it was sheer delight to see a quintet of women, literally sizes zero up to 20 but all moving with perfect fluidity, and also a group of seven little girls, the fledgling class, similarly working in unison. As at luxury hotels, if you put something on it must be the best, as here. NOW SEE, BELOW, TWO VIDEOS OF REALLY GOOD HAWAIIAN DANCING