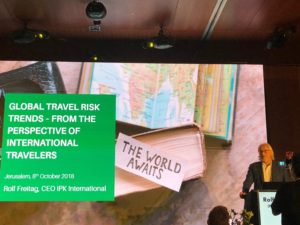 Jerusalem is history and religion, with a turbulent past and an undercurrent of feeling that anything could, but should not, happen.  It was therefore all the more appropriate, says the gal, that the first International Tourism Security Summit, ITSS, was held there, October 7-9, 2018, at the Igbal Hotel (where, incidentally, Rodney Sanders had once been GM).  The over-riding message was that in general, terror threats are not stopping travel. Rolf Freitag, CEO IPK International, revealed that although 13% of the thousands his company continually monitors will never travel abroard, 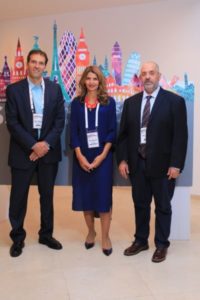 Norwegians are the least scared, with only 20% being terror-sensitive (at the opposite end of the scale, at 65%, are Japanese). in 2018 Switzerland is seen as the world’s safest destination, followed in turn by Canada and Australia. The first of the two full days of sessions was opened by Amir Halevi, director general of Israel’s Ministry of Tourism, who stressed that the optimal way to deal with terror is to maintain routine. “In the past we stopped all tourism marketing at times of war and terror but now we sincerely believe that the business-as-usual approach is more beneficial.  We have also extended our message from pilgrimages to sun and fun” he said.  His colleague Ilanit Melchior, director Jerusalem Development Authority, agreed with the need for proactivity, and appealed for continuing discourse, including an online forum.  The challenge, however, is that security is like an elephant in the room, no-one wants to talk about it, said Brigadier General (Retd) Avi Bnayahu, owner of Bnayahu Strategy and Consulting. 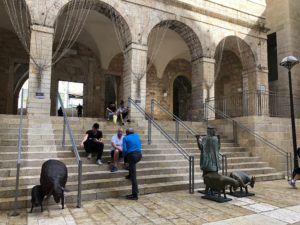 Mamilla Mall, looking up at The Mamilla Hotel

Another ITSS speaker, Victory Cruise Lines’ President-CEO Hans Lagerweij, who is also a trustee of the Safer Tourism Foundation, pointed out that petty theft or other crimes, plus food poisoning, and swimming pool dangers are far more of a hazard to travel than potential tourism. Interestingly, swimming pools and the sea are part of Amir Halevi’s new come-to-Israel approach. His Department is stressing that Israel is now increasingly seen as a destination for ‘sun and fun’. The country saw 2.7 million international visitors for the whole of 2017 and will far surpass that this year: already, the January-September 2018 total is just over three million international visitors, with 677,900 coming from the USA. 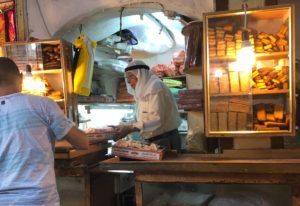 Shop in the Old Quarter

In Jerusalem, for instance, visitors will undoubtedly walk the length of the Moshe Safdie-designed Mamilla Mall, also known as Alrov Mamilla Avenue – it is part of Alfred Alrov’s $400 million mixed-use development which also includes a pair of Alrov’s many luxury hotels, the David Citadel and the Mamilla.  Walk along it, past 140 stores, restaurants and cafés (the people are fascinating – see above).  At its Southern end you go through the Jaffa Gate to walk for about 15 minutes along an uneven stone path about six feet wide, flanked by a hubbub of close-packed stores that seem to spill out over the stones, polished to a shine by centuries of passers-by.  Eventually you emerge, to the Hakotel, Western Wall. Some, at that moment, feel that the entire reason for the trip to Israel was more than worthwhile. HERE ARE VIDEOS OF MAMILLA MALL, AND THE WESTERN WALL