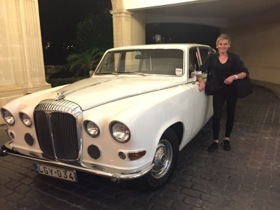 It is rather nice, says the gal, to be picked up in a vintage car, and not many hotels have limos that are 13 years older than they are. This Daimler is 1955. Malta’s classic luxury hotel, Corinthia Palace Hotel & Spa, was opened June 6th, 1968, by the Duke of Edinburgh. It evolved in an interesting way. In 1952 Alfred Pisani bought Villa Refalo, changed it name to Villa Corinthia, because of its columns, and turned it into a restaurant. Then he and his family added a four-floor block of bedrooms, so it became a 150-room hotel. And that spawned the burgeoning Corinthia hotel group, which now has splendid hotels from London east to St Petersburg, with Lisbon, Budapest and Prague along the route. Add a couple in Africa and four more here in Malta.. 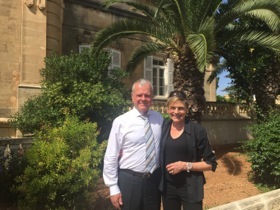 David Woodward in front of the original villa

Villa Corinthia from outside looks so natural, surrounded by beautiful gardens – rare in this greenery-scarce island. Inside, it is a really elegant dinner-only restaurant, marbled floors and high-high Corinthian columns. We dined here, with tableside service and crêpes Suzette, and a really splendid Meridiana Wine Estate Melqart Superior Cabernet Sauvignon Merlot 2012 (winemaker Roger Aquilina). I heard about the hotel’s Private Malta package, that takes you into magnificent private homes not generally open to the public, and about how the hotel’s Asian restaurant, Rickshaw, is working with Andy Kwok, of The Good Earth restaurants in London. 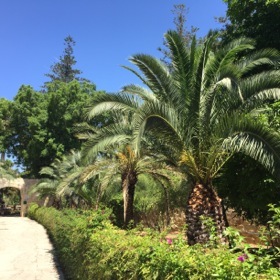 My time here was full of history, fitness, nature – and food. History, looking at old photos of the hotel and the villa. Fitness, the gym with its regular keep-fit lady enthusiasts there at its 6 a.m. opening – the gym is above Athenaeum Spa, which has 14 treatment rooms and better book quickly for your Yon Ka facial or, like me, you will have to delay until tomorrow. Nature – merely cross De Paule Avenue, outside the hotel, to get into the meticulously-tended St Anton’s Gardens, where you can walk or run for ever (apparently this is the official garden of the President of Malta, Marie Louise Coleiro Preca). Oh food. What can I say? Chef Stefan Hogan started making biscuits with his Maltese mother when he was nine, and joined Corinthia in 1992. 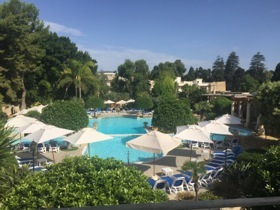 One of the two adjacent pools

I lunched with him, and David Woodward, in blazing sun at Summer Kitchen, by one of the two big pools. Stefan Hogan is a great believer in local products, which are labelled AM, Artisan Market, both on printed menus and, as a separate section, at the copious breakfast buffet. He is also setting up an apprentice scheme. This luxury hotel is, by the way, running at 100 percent occupancy throughout the summer months – not everyone wants to stay in the nightclub area of town. They come back here, again and again (ten percent of the Brits are regulars) for everything that it offers. And that includes the smiles. Without exception, even the most-vintage bellman always smiles, and genuinely.