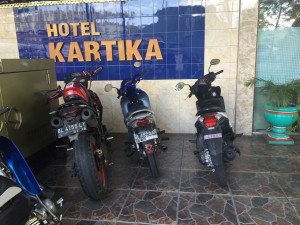 How would the gal sum up a few hours on Pulau Weh, the biggest of five islands that make up Sabang, formerly known as Gemispola? Confusing is the key word. It is confusing because Sabang is also the name of Pulau Weh’s main town. It is confusing because the quintet of islands are the most western part of Indonesia, and yet the terrain reminds many of parts of the Caribbean – but then add in a mosque, and the fact about 99% of women wear tight-fitting headscarves. Another key word is motorbikes. Sabang Town sees the full range of transport, from kids on bikes to a vivid apple-green Ferrari-look home-made car, but, honestly, 99% of transport is by motorbike. One of the two most prominent centre-town hostelries – as near to luxury as is possible – is Hotel Kartika, which sensibly has a motorbike, rather than a car, park. 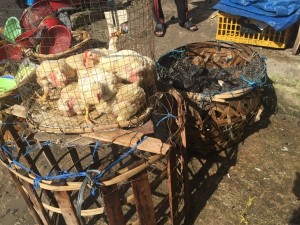 Hotel Kartika is at least centrally placed, on Jalan Teuku Umar. I had already walked to the market nearby, a marvellous if not exactly salubrious experience. There were chickens ready for sale, and next to their basket, another held ducks trying vainly to make an escape. A couple of ducks, resigned to their fate, rested on top. An old woman, squatting down to a height of only about two feet off the floor, had her goods spread out on a cloth in front of her – a pile of chillies, some enormous papaya. A banana seller had a kitchen-sized table groaning with at least six different types of banana, plus six-inch fish at one end, as if for extra appeal. (The book I am reading right now, Josh Kaufman’s The Personal MBA. without going to business school, stresses the importance of having an add-on, not entirely relevant to your main product.) 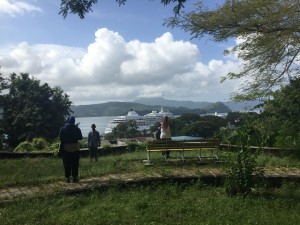 I wanted to walk up Sabang Hill, a lush area of palms and other greenery, but somehow I walked up Jalan Teuku Umar to Taman Ria, and turned right along Jalan Diphonegoro, about 200 feet above, and parallel to, Sabang Bay. A defensive bunker there was built by the Japanese after they invaded on March 11th, 1942. Nearby, all by itself, is a building about six by six by six feet that announces it is Internet Café, and locals work their smartphones at a long table behind. Others use their smartphones to photograph friends, with a background of Silversea’s Silver Shadow in the port below. Across the road, a sign in front of Wellcome Kirgantara Guest House says this was one of two houses, now known as Dubbele Woonhuis, built in the 1900s by The Netherlands‘ Sabang Company, this one to house the ship look-out, the other the town governor. 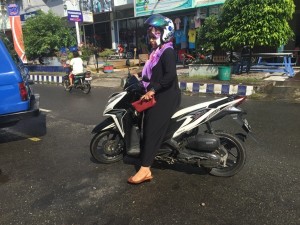 Ready to go, her smartphone in her helmet

I honestly do not think Wellcome Kirgantara Guest House fits into my luxury hotel category but at least it should have good connectivity a few yards away! I turn and watch the traffic buzzing along Jalan Diphonegoro, which is one way. Ha ha, finally I get the record of the day, a motorbike carrying six, sic, as shown in the big image at the top of this story. Another memorable bike vignette was a woman with a helmet over her headscarf, and her phone attached inside the helmet. See her, to the right. Everyone was so friendly, and no-one resented having their photos taken. And, unlike so many markets in the world, no-one really wanted me to buy anything, not even a live chicken.