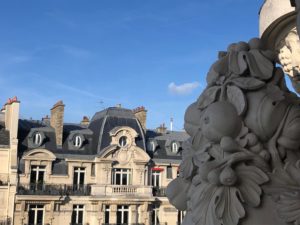 A really unique luxury hotel – originally opened 1910 as comfort for the customers of nearby Bon Marché department store – reopened July 17th, 2018, after a closure to allow a complete titivation (cleaning up rather than change-the-past look) by Jean-Michel Wilmotte. See this designer’s style, and his love of ceiling patterns in the video below, of suite 508. The hotel’s stunning exterior, on the corner of the arty Left Bank’s blvd Raspail and rue de Sevres, is still as Gaudi-like as ever. Now, enter from the main door and you look through a series of arches, a ceremonial walkway flanked by white, and sometimes wedding-cake-embossed, walls, as show above. This is, by the way, a hotel that has, from the start, been a regular haunt for locals. 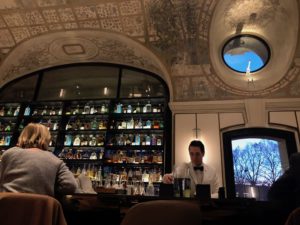 There were authors, including Pierre Assouline and James Joyce. Pierre Bergé lived here for a long time. Entertainment habitués included Serge Gainsbourg and Juliette Greco. Carla Bruni, who retreated here for privacy during her years living at the Elysée Palace, apparently still comes from time to time (though her husband, a keen swimmer, does his daily laps in another hotel’s indoor pool). Today, a main gathering place for the Paris cultural elite is Josephine’s, the ground floor bar named for Josephine Baker. I thought this the quintessential bar for sophisticated conversation: sitting down, or up at the bar, regulars gather after work or before a performance. In a ‘theatre’ with frescoed walls blending with the barrelled ceiling above, you might choose, from the extensive vodka menu, a Rive Gauche (26 Vodka Guillotine, with St Germain, herbs, celery and Taittinger Cuvée Lutetia – the family owned the hotel for a time). 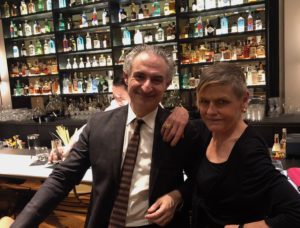 GM Jean-Luc Cousty, back at the hotel for the fourth time in his career, is as exuberant as a pre-schooler now all the work is finished. He says he plans a Lutetia literary event, with an international jury: the hotel has a superb library, open to anyone (I immediately spy interesting tomes called Everest, and Icons). He does seem to have everything here, including an indoor pool, in case Mme Sarkozy wants to swim, and a great gym, and a new outdoor inner courtyard. So what else does this characterful hotel need? Cousty tells me a second bar, Aristide, opens shortly – it will have a cigar room. When it comes to dining, what the bars have to offer, which is pretty extensive, is complemented by the popular Brasserie Lutetia, with Gérald Passedat’s Michelin reputation (this place seems to be see-and-be-seen). 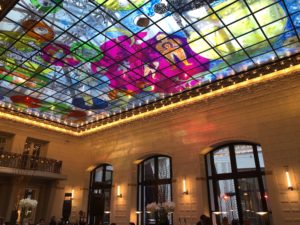 I actually dined in the more-discreet Le St Germain, an inner room that leads through to the newly-opened inner courtyard. The squash court-sized indoor space dominated by a strategic flat ceiling with Chagall-type multi-colour back-lit stained glass by Fabrice Hyber. This is the place for a quiet tea or coffee, or something from Benjamin Brial’s comfort menu (you get chunks of Poiläne-type bread, from Dallas bakery, and Bordier butter, and the trendy choose the now-ubiquitous lettuce salad, with lemon and virgin olive oil – then go on, say, to the best-selling LVT (‘Lvtetia) burgers, six-inch-high towers of Charollais ground beef, with Beaufort cheese). Breakfast, incidentally, is in a dedicated room, with more Bordier, both butter and yoghurt, and more types of croissants than I knew existed. It is really not surprising that this is a luxury hotel which quickly becomes a way of life, especially for multi-interest movers and shakers who like this part of town. WANT TO SEE SUITE 508, WHICH IS ALSO NAMED FOR JOSEPHINE BAKER?