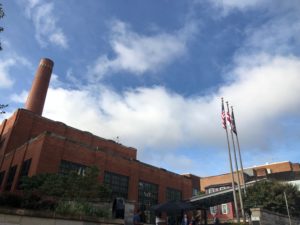 Looking up, you see mostly-brick buildings for a whole block

Ritz-Carlton Georgetown claims, like many other luxury hotels, to be unique but in this case it probably is.  A growing number of former banks, post and telegraph offices and schools are being converted to hospitality but this must surely be the only ‘city incinerator’ – although, to respect American sensitivity, it is generally said the hotel was formerly ‘industrial offices’.  The gal knows better.  The all-brick structure, in Georgetown on South Street, parallel to M Street, is also a one-off for the number of bricks used, both outside and in. The exterior shows that the entire block of South Street, between 31st NW and 32nd NW, seems to be an infinity of gorgeous bricks. The original chimney stack, covered over, is a private dining room – see below. 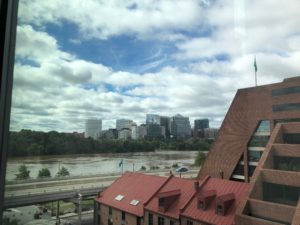 The 86 rooms are in two wings, joined below ground, and separated at street level by historic clapboard buildings that are now the hotel’s administration offices.  I was in 740, a Presidential Suite, with a partial view of the Potomac – see the video below.  This is a very Washingtonian space, which speaks of successful bankers and politicians who love sitting comfortably in grandfather-type tan leather sofas.  For those who choose to dine in their rooms, there are many hints of the city – choose, say, such a DC craft beer as DC Brau’s The Pils, or Porter.  I was, however, dining with Hotel Manager Martin Raffl in Degrees Bistro.  I was tempted by a Georgetown Mule cocktail, of Virginia Highland whisky, blackberry purée, ginger beer and lime juice, but went, instead, for a Meiomi Pinot Noir, South Coast 2017, which went beautifully with a beet and baby kale salad (why IS US kale so addictive, while European kale is hard as nails?).  The ribeye that followed was divine, and further enhanced by truffle fries, oh boy. 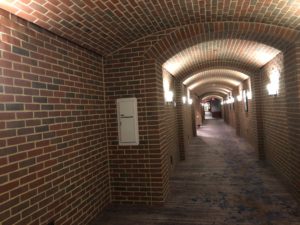 In the morning I eschewed the ‘Georgetown breakfast melt. of potatoes, English muffins, Virginia sausage, white Cheddar and fried eggs, for somewhat simpler fare.  Then I was shown around the hotel, and its memorable brick-lined corridors. Right next to the gym, incidentally, are 11 ‘wellness rooms’, all 450 sq ft and boosted by Aromatherapy Vitamin C showers, plus Sound+Sleep machines, and yoga mats, and lavender bath salts, sleep masks and ear buds.  They also have Tempur-Pedic pillows, originally created by NASA, plus alpaca basket-weave throws. There is also impressive art throughout the hotel, with many modern-slant portraits of President Lincoln and his ilk.  These paintings, apparently, all come from DTR Modern Georgetown. 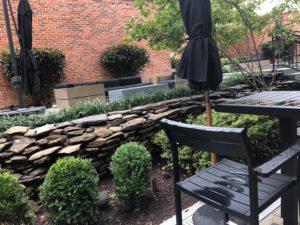 The hotel garden is a hive of activity, in Summer

I was also thrilled to have an escorted walk, a couple of blocks to the C&O, the Chesapeake & Ohio Canal, for which President John Quincy Adams broke ground.  The canal was to be 185 miles in all but today the remaining bits in Georgetown are a sorry state, silted up and covered in weed.  There is hope that the Georgetown Heritage, a non-profit organization headed by Alison Greenberg, will be able to restore one mile, and bring back a boat that formerly used to take passengers along the waterway.  The current initiative is being supervised by James Corner, whose Field Operations designed New York’s highly successful High Line, so fingers crossed, he will work his same magic here in DC.  Meanwhile, this luxury hotel has its own outdoor space in the form of a garden created by Ritz-Carlton Washington DC complex GM Marcus Loevenfort: when the weather allows this is a magnet not only for hotel guests but for local residents. NOW SEE, FIRST, SUITE 470, AND THEN INSIDE THE ONE-OFF CHIMNEY-STACK PRIVATE DINING ROOM