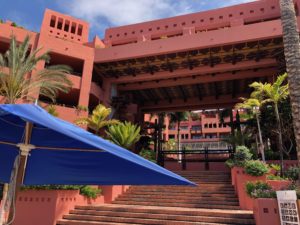 Part of the sprawling terracotta-coloured hotel

The Ritz-Carlton, Abama, is honestly the most unusual of that brand that the gal has ever seen.  After a 90-minute drive diagonally from north-east to south-west Tenerife, in the Canaries, you enter the top of what resembles a massive green bed quilt – 400 acres in all – flung over an undulating slope that goes down to the ocean, or at least to a clifftop 100 feet above it.  The hotel occupies just some of this acreage. You go into what looks like a low-rise terracotta fortress and look straight through to an impressive view of the green ‘quilt’, and on and on.  This is the entrance to the main block of a 465-room hotel, spread throughout this zig-zag building and also in villages of separate or semi-detached terracotta houses that stretch down the ‘quilt’. 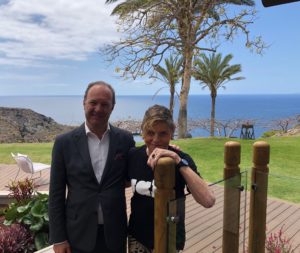 I was meeting up with newly-arrived GM Gregory De Clerck and first he took me on a walk around the campus.  First stop was the kids’ club, a large garden with every plaything you could think of, including a wood version of Louise Bourgeois’ famous metal spider sculpture.  Inside, the club has various rooms, for eating, sleeping, watching movies and, all of them, for making NOISE – how do the 40 nannies, one for every eight kids, retain their hearing? Next, we took the tarmac road that forms one side of the whole: it runs from the entrance building down to the clifftop.  As we walked down we passed some villages and pools that are family-friendly, and others that are adult only. 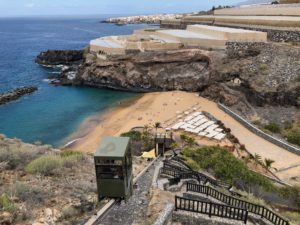 The funicular down to the beach

At the end of the road is the top of a funicular that works nonstop taking hotel guests down to a secluded beach that is miraculously hotel guests only.  We lunched at the closest of 12 eating paces, for magnificently sweet Santona anchovies, from the north of the Bay of Biscay, followed by today’s catch, an enormous seabass cooked in salt crust and cracked table-side (see a video below).  I heard how the hotel is going after a five-Gs market, golf, grey, gay, group and gourmet: on the golf side, the course immediately above the main resort is still owned by the developer of the entire Abama complex, Spanish media group Polanco – the hotel itself is now part of Blackstone’s empire. On the group side, Dom Pérignon is about to host two back-to-back getaways to launch a new vintage, 70 lucky recipients each. Another booking coming up is an incentive for 800. 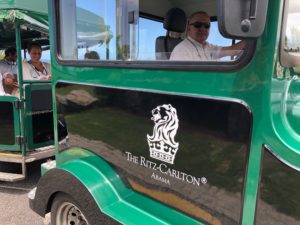 How do they manage this when such invitees obviously want their own bedrooms?  Simple, said Gregory De Clerck. It will be a buy-out of the hotel and he is renting the required number of time-share golf villas that are still owned by Polanco. Having walked down to lunch, we took the delightful toytown-like shuttle train back up to the main building.  My car waited, and several of the dispatch team made sure its WiFi would work for a scheduled Skype call (it did).  After promising to come back for more – including hopefully dinner at MB, the two-star Michelin overseen by Martin Berasategui (who has three stars for Restaurante Martin Berasategui at Lasarte-Oria, 15 minutes’ drive south of San Sebastián) – I sadly left the very friendly, and eventful, luxury The Ritz-Carlton, Abama. ENJOY VIDEOS OF THE HOTEL LOBBY, AND OUR SEABASS IN SALT CRUST