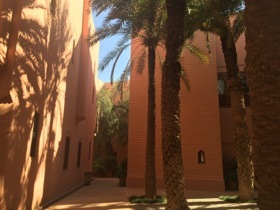 Alleyways between blocks of buildings

This looks like a scene in a town but no, it is alleyways between individual blocks of one of the most extraordinary luxury hotels of the 21st century, the five-year old Royal Mansour, Marrakech. The King wanted a hotel that he felt he owned directly (yes, he ultimately owns, through various companies, a few other properties, too). But this would be his, directly, says the gal. By transforming part of what was formerly a public swimming pool and park, he now has a village, sorry, hotel, of 53 suites, all with three floors and set in big blocks, as shown, with fairly insignificant pale green doorways. 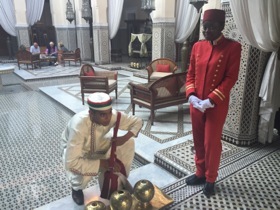 I was in 27, a two-bedroom suite. Climb 32 tall marble steps up from the ornate ground floor living area (which has a private garden with decorative pool). Up there I had two bedrooms, another living area, and bathrooms. Up ANOTHER 27 steps to my rooftop, with a gorgeous 12-foot pool. But I digress. Back to the main building, which is truly a palace, a patchwork of tiny marble mosaics and cedar wood and carvings and big chandeliers and lovely people. Oh, Marrakech people truly understand hospitality, it seems. 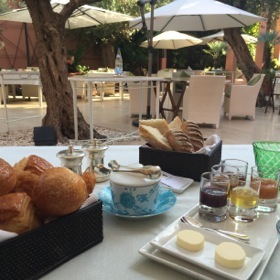 I ate  magnificently. At dinner in the Moroccan restaurant, we started with ceremonial washing of hands, from a silver bowl, and we tasted a memorable Les Celliers de Meknes Roslane Les Côteaux de L’Atlas Premier Cru 2011. At breakfast, I saw outside, enthralled by the fabulous ambience, the exquisite J.L. Couquet porcelain and having no fewer than 19 starch items brought automatically, namely a plate of Moroccan pancakes, a basket of pastries and a basket of bread rolls, one of which a tiny song bird cleverly managed to throw on to the floor for his breakfast. 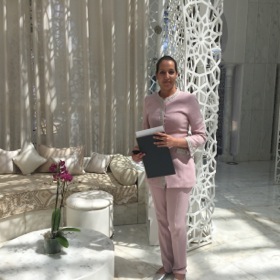 The spa is a triumph of the Parisian firm 3bis’ imagination. Its reception soars in a white lattice frame surrounded by glass. Of course when in Marrakech, do hammam. Yes, I did. Imagine one hour of mostly lying on a baking hot marble slab and from time to time being washed with black soap and later being scrubbed with what felt like a wire-wool glove, and then lathered with essential oils and all the while the young lady, in what looked like a wet-suit, filling big silver pots from a continuously-dripping tap and pouring all that water over me, slosh slosh. At the end I was given the used wire-wool glove as a souvenir, in a dinky golden net bag. 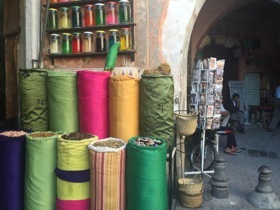 And also, when in Marrakesh, DO the Medina, the old area with its soukhs, the alleyways that inspired the architecture of this luxury hotel, and a jigsaw of ancient buildings that slot into each other. My guide was surely the best in town, the charming Bine-Bine, who knows so much (Marrakech means ‘leave quickly’, because that is what the caravans of yore did). Today there are about 16,000 tiny shops in the Medina, and you should always bargain down about 30-40 percent of the original asking price. Bine-Bine took me into a small riad hotel, around a central courtyard. His family home was just like this, with 14 bedrooms for the extended relations. They sold it in 2001 for €80,000, to be made into a hotel, and it resold in 2007 for €700,000. But he did not say if-only. 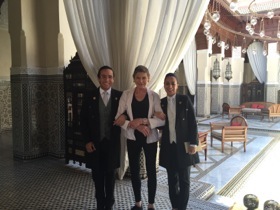 It is always a good idea to be hand-in-hand with concierges!

Bine-Bine’s own kids want to be a lawyer, the 18-year old, and a doctor, the 14-year old. He is so proud of them. He took me back to the luxury Royal Mansour hotel exactly at the end of the allotted time and handed me back to the concierges. Now there is a proud team, so happy to be part of this amazing palace hotel. As they wave me off I am told of a first-time visitor to Marrakech, an American woman, who cried when she left here. I never thought I would actually stay in a palace, she sobbed.