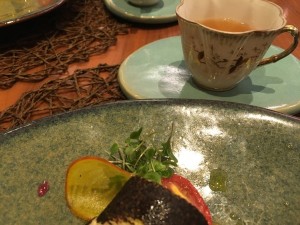 Tea pairing with the starter

Looking out of the windows of the gal’s suite 714 at Cape Town Hilton City Centre is a colourful experience, as seen above. Up in the distance is Table Mountain National Park, with its signature Lions Head peak, 2,194 feet above sea level. Closer in are the multi-coloured hues of people’s houses, which bring a smile to the face. This is the Malay area of Cape Town. Of the city’s total-metropolis population of 3.7 million, only seven percent are Muslim, but many live and work in this area. As a result this 136-roomer has become THEIR luxury hotel, and the locals support it, in many cases because it is halal, which is good for Jews too, it is nearly all alcohol-free. 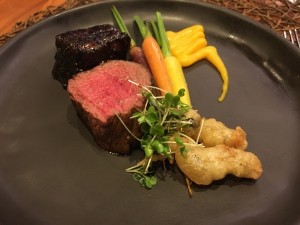 To support the locals, a new menu is coming to 126 Cape Kitchen & Café – so called because of the property’s address, 126 Buitengracht Street. The menu is paired with Ronnenfeldt teas, and with creative soft drinks. I had a sample meal, with hotel GM Marc Schuacher. We started with Blackened Fairview goat’s cheese, beetroot, burned leek, pickled baby beets, and orange marmalade from Citrusdal. This was served with Splendid Spring Darjeeling – I was told its floral undertones unleash the cheese’s fragrance. The tea was poured into an exquisite Victorian cup, sitting on a turquoise ceramic slab that formed the saucer: plates are similarly ceramic, all bespoke from a pottery here in Cape Town – see the video, below. 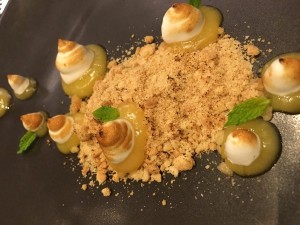 I looked at some of the signature beverages on offer, which included rejuvenating green blizzard – spinach, apple and celery juiced with lemon and mint: others were granadilla (a type of passionfruit) and vanilla over crushed ice, with lemonade, and, even more simple, fresh-squeezed orange, grapefruit and lemon with soda. I actually stuck with water. The next food course resulted in bowls with poached tiger prawns and tomato concassé, over which smoked lemongrass and coriander consommé was poured, at table. After this, plates held cubes of braaied (barbequed) brisket and pasture-reared beef fillet, with two tempura oysters, and three heirloom carrots. The final glory was a crumble surrounded by tiny blobs of lemon and rooibos curd topped with vanilla meringue. 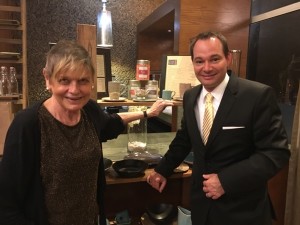 For those who enjoy a wine-less dinner, this is exquisite, and the tastes absolutely memorable. Well done to the hotel’s creative GM, Marc Schumacher, a Hanseatic who has done marvels to food, throughout his career, at such other significant luxury hotels as Rome‘s now-Waldorf Astoria Cavalieri, where he trebled poolside drinks sales, including alcoholic, by giving out masses of salty snacks. In Athens, later, with six weeks to go, he hired and trained staff for six restaurants that had to be open in time for the 2004 Olympics. Here in Cape Town, another challenge is overseeing the complete re-do of the hotel’s lobby and eatertainment spaces, without closing.