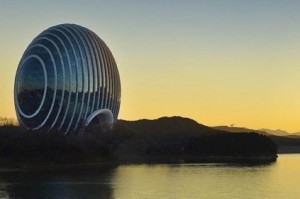 This is not only one of the most extraordinary luxury hotels the gal has seen – think of Sheraton Huzhou, like a standing doughnut, complete with hole. This is Sunrise Kempinski Hotel Beijing, an hour’s drive from Beijing in the little village of Huairou, near a massive Red Bull factory. But the complex is unique. The 306-room hotel is on a private space with, half a mile away, a massive conference centre, a second hotel (the 111-room Yanqi Lake State Guest House), and NINETEEN boutique hotels, each having ten to 19 bedrooms, including a Presidential Suite, and an 80-foot pool, a screening room and full service. 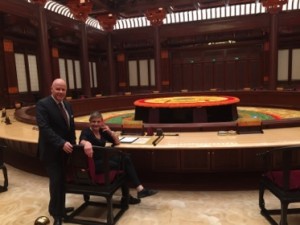 What on earth is this all about? The idea was that this would house G20, hosted in China 2016. But President Xi has decided that since Jack Ma decided to list Alibaba in New York rather than a subsidiary stock exchange, it would be more appropriate to host the G20 meeting in Jack Ma’s birthplace, Hangzhou. Never mind. He was able to host APEC here, last November, in this very, very grand chamber, left for posterity. I am sitting in Xi’s chairman’s chair, my feet on the world’s biggest one-piece carpet. 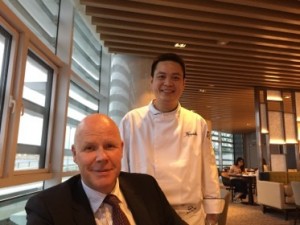 The on-site master of this complex is an amazing Parisian, Brice Pean. He thinks of himself as mayor of the entire Yanqi Lake ‘village’. He sells those boutique hotels to small meetings, or to groups of friends who want a weekend out, away from the authorities (the price is a standard $50,000 a night, regardless of how many rooms or how many people are involved). He charges busloads of tourists a pittance to come and use washroom facilities. He had a big Union Pay meeting checking out same time as me. 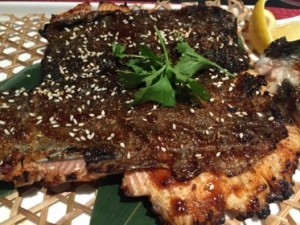 He has something like 20 restaurants, including an incredibly successful Paulaner Brauhaus – all the beer you can drink for RMB98 ($16), and young local ladies love it as much as the guys. His head chef, Bruce Xie, who has oodles of Kempinski experience, meticulously oversees all the outlets, which include a teahouse and a SIP juice bar. We dined in Elements, and I tried the local fish, hongzun, which is served grilled, spreadeagled, and not the tiniest little bone anywhere in its enormous body. Apparently it is a cold water species from Shentang Valley, originally called Sparrow-hawk Valley. 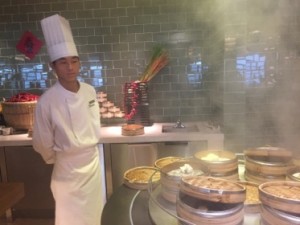 At breakfast Elements comes even more into its own. There must be over a dozen serving stations, offering western, different types of Chinese, Indian and Japanese. There is a juice bar, even a dessert bar. I talk to Brice Pean about the challenge of the one-baby policy. Ah, he said, Chinese women have 30 days post-birth recovery. He was the first to establish, working with hospitals and insurance, that after a few days they and babies could move to his hotel, with full medical support when required. This freed up hospital beds and meant his hotel not only benefited from mother-and-baby but family members, with incremental spend. 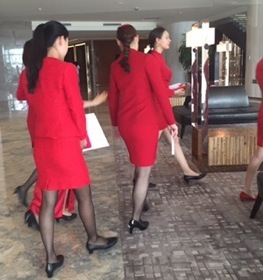 At that moment a female Red Army goes past. These are some of Kempinski’s famous Lady In Red hostesses, who welcome and help guests throughout a stay. They are here, at this luxury hotel, because if it cannot host G20 next year, it can follow last year’s APEC with the 2015 Kempinski General Managers’ meeting. They are shortly arriving, from all over the world, and Kempinski hotels in China, including the lovely Chengdu hotel, have loaned a lady or two to help out.