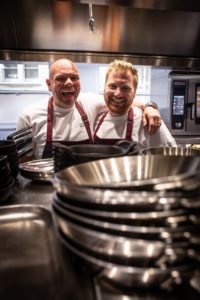 Next Monday, November 5th, 2018, Corinthia Hotel London hosts the 2018 World Tourism Awards, co-sponsored by The New York Times, Reed Travel Exhibitions and United Airlines – and, honestly, it deserves its own award for all its activities and experiences.  It has, for instance, a new, month-old restaurant, and everyone at this luxury hotel is thrilled, to say the least. Celebrity chef Tom Kerridge, who has three Michelin stars between his two eating places in Marlow, The Coach, and The Hand & Flowers. The author of such tomes as Tom’s Table: My Favourite Everyday Recipesand the star of numerous television shows says he always wanted a restaurant in London, and the stunning main, columned space at the hotel seems the perfect venue.  This is a multi-pronged partnership, between Corinthia and Kerridge, and into the picture, too, comes David Collins Studio, and also Tom Kerridge’s wife, sculptor Beth Cullen, who trained under Anthony Caro – she did the two stunning lifesize gold statues, one of a man’s suit, that contrast so well with the malachite-coloured walls, says the gal. 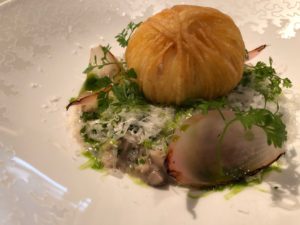 As if in homage to the fact that another Tom Kerridge restaurant, Butcher’s Tap, is also butcher’s shop, one wall of the restaurant includes a glass-fronted meat-ageing cabinet, shown above. There is a lot to see, as you sit at really comfortable curved burgundy leather banquettes, at wood tables set with William Edwards china, and small pots of herbs. There is a good-value set lunch, £24 for two courses, including VAT, but we went à la carte. You must try chef Nick Beardshaw’s mushroom ‘risotto’, I was told, and see it here.  It is rice-free, merely mushroom julienne, with a perfect poached egg covered in a crisp with aged parmesan. I went on to try pease pudding for the first time: the traditional pea and legume mash, cooked with a ham joint, here coming as a small pot, with dishes of tartare sauce and Matson spiced sauce (so named as Tom Kerridge’s school was near to Matson village, in Gloucestershire). These were all accompaniments for the restaurant’s version of fish and chips, namely delicious brill, with a side of real, thick, chips. 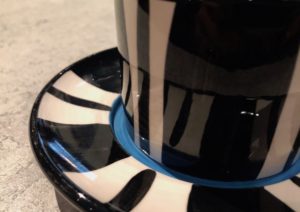 Hotel GM Thomas Kochs says he thought he knew what consumers want but, honestly, it seems that freestanding restaurateurs know even better. This 80-seat, which has a further 40 seats at its adjacent bar area, is regularly doing 110 lunches and 140 dinners and, at weekends, staycationers  come to dine, and sleep over.  Many of them must exclaim not only at the food but at such elements as the coffee cups, specially made by a Gloucestershire friend of Tom Kerridge, Kevin Reckless, working as Reckless Design.  Yes, there is plenty to make you remember eating here, at Tom Kerridge – just as there is a lot to remember about the hotel.  Not only is this an 1885-vintage building with history (Winston Churchill happened to be here as Big Ben, half a mile a way, struck 11 a.m. on the morning of 11/11/1918 when World War I ended).  It also looks forward, to the future – on October 18th the hotel announced André Garrett as new hotel chef, with a re-positioning of its other restaurant, The Northall, to Mediterranean seafood. 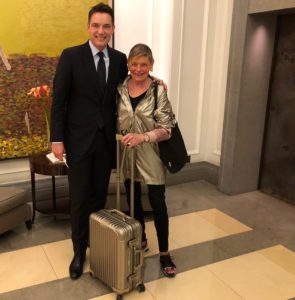 The current Artist-in-Residence here at Corinthia London is Future Laboratory – it organises breakfast briefings on trends for tomorrow, and Dare To Know dinners, when 20-25 people discuss a topic, say AI, with futurists.  Future Laboratory is also briefing the top managers within this luxury hotel.  There are other things going on too: bar offerings have been enhanced by mixologist Marcis Dzeizainis, whose latest concoction is Last Dance, formed of Grey Goose vodka, aperitivo Rinomato, pink grapefruit, strawberry purée, Chambord: Dzeizainis is part of trendy-London duo Sager + Wilde, working with restaurateur Michael Sager.  Oh yes, and, thinking of Tom Kerridge and his television appearances, Corinthia London will itself star, in two features being screened by the UK’s BBC1 channel some time this December, exact dates not yet announced.