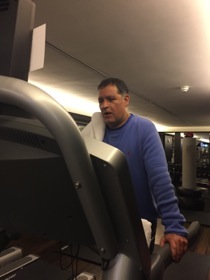 InterContinental London Park Lane was a revelation when it opened in 1975. Graham Jeffrey, who seemed like a top global diplomat in disguise, was opening GM. Equally important was Mary Gunther, a statuesque lady, married to a Polish count, who ruled the hotel with European determination – she later absconded to head the hotel operations of one of London’s best private hospitals. This is a luxury hotel with absolutely impeccable credentials. The gal, doing a brief overnight in L-shaped suite 688, looked straight out at Hyde Park Corner and Wellington Arch, topped by Adrian Jones’ 1912 statue, the Quadriga, a figure of peace with four horses. Only one other hotel has such a close-up of the Arch – for now, because when Peninsula London is up and running some of its top floor rooms will have the view, too. 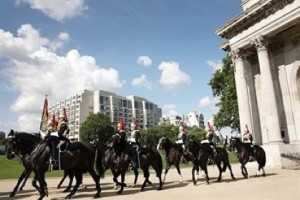 The hotel, left, looks out at Hyde Park Corner and Wellington Arch

How many know that the Arch was designed by Decimus Burton, in 1828, as a tribute to Sir Arthur Wellesley, 1st Duke of Wellington, soldier and later Prime Minister? Originally it was topped by a statue of the Duke on horseback but an 1882 road-widening scheme somehow saw the Arch moved, and its topping changed. At one point Decimus Burton is reputed to have dined, with seven companions, in the hollow, boat-shaped body of one of the Quadriga horses, which sounds like how many students can cram into a Beetle. Now another question, how many know which top hotel GM regular works out at 4.30 every morning? The answer is here. I mentioned that this was a short overnight. I was in the gym at 5.25 a.m. and Alvaro Rey, and amazing Colombian boss of this 447-room hotel, was just FINISHING his daily workout. 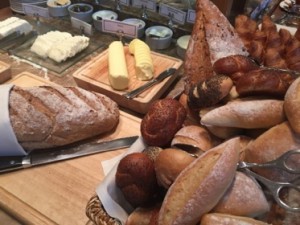 He gets Girlahead first prize for early-morning hotel workouts.  InterContinental London Park Lane is, by the way, truly up to date with changing habits of consumers. At one time it had the most ghastly faux Regency furniture in the lobby, all spindly legs as if for spindly-legged geriatrics rather than the scions of industry who are its backbone – it now has really comfortable seating, and all-day snacking there. It started with a classic fine dining room, now it has the fabulous Theo Randall, once of River Café, and it is about to announce what will replace its more-casual Cook Book Café. And the seventh floor club lounge gets better and better. Look at the breads, with two kinds of butter, and they ask you what kind of coffee you want, and the cocktail hour gives a unique sunset view of the Quadriga (this IS the only hotel that has, and will have, a club lounge overlooking Hyde Park Corner. 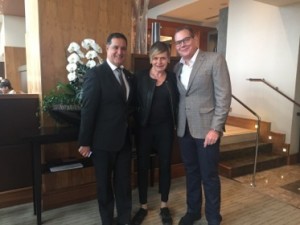 I love the fact that in top luxury hotels the seasoned traveller never knows who is going to turn up next. I was meeting Alvaro Rey, now showered and dressed in his best. But he had somehow, as only Alvaro can, managed to attract not only his CEO – who was deep in conversation, so we could not get him in the photo – but also the CEO of IHG for the whole of Africa, Middle East and Asia, with the exception of Greater China, another dear friend, Jan Smits. Now that is the start of a day that I really love, even if it is the finale of a horribly short night. As it happened, that CEO – Richard Solomons, was enroute to New York, where last night, Monday November 9th, 2015, he won the ultimate big-hoteliers’ prize, HOTELS’ Corporate Hotelier of the Year. And what an honest, and witty, acceptance speech he made, recalling how his father, who rented out cars, once drove across England to rescue honeymooners who had broken down – do whatever it takes to have happy customers, he said.