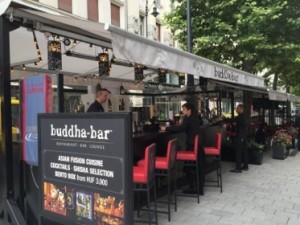 The hotel’s territory spills out to Vaci street

Budapest people like eating and drinking, and in summer outside facilities pop up all over the place. This pop-up Buddha-Bar is in Vaci, just behind the luxury-lifestyle Buddha-Bar Hotel Klotild Palace Budapest. Unlike its Paris sibling, which is directly managed by Buddha-Bar’s operators, George V Entertainment, this one has so many parents it is difficult to attribute biological ownership. The triangular-shaped, six floor building belongs to the mighty Beghelli electrical supplies company (they have stores on the ground floor, facing Vaci). The 102-room hotel is operated by Hungary’s Mellowmood group, which specialises in three-to-four star. Presumably, says the gal, it is Mr Mellow – or, rather, Mellowmood’s bosses Zuhair Awad and Sameer Hamdan – who pay a licence fee to George V, to use the BB name. 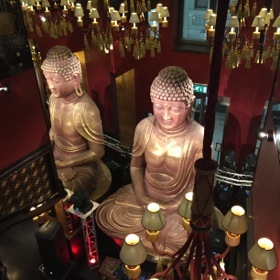 Anyway, the 1900-vintage, turreted building certainly looks like part of the BB family, wild colours and fittings. Climb 38 stately stone steps from the ground floor up to the main restaurant, dominated by this Buddha – the restaurant’s upper-gallery was also used to host the hotel’s massive 500-strong post-Grand Prix party, all tickets sold long before. How Archduchess Clotilde of Austria, also known as Princess of Bohemia and Hungary, 1846-1927, who built this palace, would have turned in her grave to see such goings on. She also built on the other side of the street – that one is now Turkish owned, and reputed to be a hotel-to-come. The buildings are identical, and topped with sculpted archducal crowns. 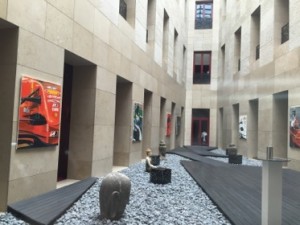 It is said that the contractor temporarily named the buildings after his daughters, Klotild and Matild, as he did not want supplies going to the wrong place during the concurrent building process, and the names have stuck. Both building were declared Hungarian national monuments in 1977. Buddha-Bar – Klotild – has a rooftop bar, which is very popular for private events. There is a sexy spa, pale blue and white with hot and cold Japanese baths. Talking of Asia, there is also an interior-courtyard Zen Garden, on the second floor. Triangular-shaped, like the building around it, it is peaceful and calm and ideal for yoga. It is used, too, for temporary exhibitions. Right now, guess what, there is a show of Grand Prix oil paintings, a reminder that it is precisely one week to the day that Ferrari‘s Sebastian Vettel won the 2015 Hungarian Grand Prix. 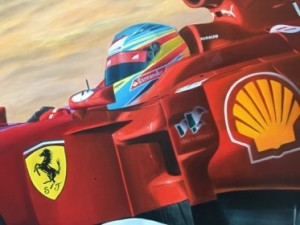 Each of the pieces displayed measures about six by six feet – they are all by Andrea Cecilia Szabó. I look at my watch. Sadly it is time to move on from this fascinating luxury hotel. On my way out I see that it won the best interior design for a European hotel, 2014, from the International Hotel Awards. I later find out that the restaurant, bar and lounge are designed, like Buddha-Bar Paris, by François Wapler – other interiors, here, are by Cristiano Benzoni and Sophie Thuillier of REV ARCHITECTURE.