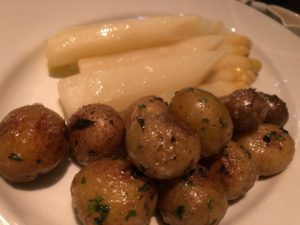 Although Islam is the official religion of Malaysia in fact only 61.3%, at the last census, profess to being Muslims (19.8% say they are Buddhists, 9.2% Christian, 6.3% Hindu and 3.4% traditional Chinese religion).  Not surprisingly, however, Ramadan is given serious attention by luxury hotels throughout much of the country.  At the luxury Grand Hyatt Kuala Lumpur there are signs in elevator lobbies on all 20 of the guest room floors – please be quiet. But hotel services go on regardless, says the gal.  Chefs, as ever, are busy working in the completely open kitchen (see above) of THIRTY8, the main restaurant that wraps completely around the square building’s 38th floor. 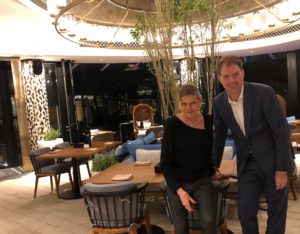 Right now there is an asparagus promotion going on.  Now as more find out every year, most European gourmets salivate at the thought of white asparagus, which to me is mushy and tasteless.  Sorry, I prefer green asparagus, ideally Englsh from the Vale of Evesham (the other day I specifically ordered green asparagus and the chef sent out half-half, green-white, anyway).  I expected a Ramadan dinner with Robert Dallimore, GM of Grand Hyatt Kuala Lumpur, to be a bit of a muted affair but five times during the evening raucous Happy Birthday renderings reverberated around the room, all from different tables. The GM squirmed each time. 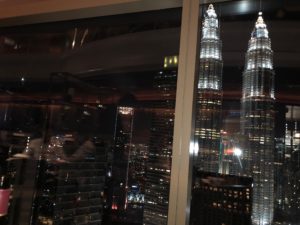 Looking out of THIRTY8, at the Twin Towers

The challenge is that THIRTY8 is not surprisingly a celebration-anniversary magnet for locals.  The views are stupendous, especially on the side facing the Petronas Twin Towers, seemingly only a few feet away.  So many want to sit on that side that the hotel has cleverly taken out five booths with banquette seating for four, two sitting opposite the others but all at right angles to the Towers, replacing them by four bigger booths-for-eight, with big wall mirrors so that those sitting facing away from the Towers nevertheless see them reflected. 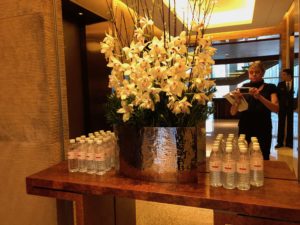 And the view is seriously memorable – nocturnal floodlighting reminds me of Paris’ Eiffel Tower at night. When I went to bed the towers were still lit up. At daybreak they looked completely different (I thought of how the Taj Mahal evolves, colourwise, throughout every 24 hours).  This is, by the way, a very thoughtful luxury hotel. Do-it-yourself pull back curtains are so much easier than having to find electronic buttons and work them in the right direction.  I loved having a laundry list that offers a bag-full, as much as you can cram in, for a certain price – wash, dried and folded.  I appreciated having the choice between a simple quick breakfast-to-go in the 37th floor Club or a chance to visit not one but two amazing breakfast buffets in THIRTY8.  I made one video and then realised there was a completely separate Asian buffet around the corner, so there are two videos on breakfast, below. AND THEN, ALSO, SEE A VIDEO OF SUITE 2909