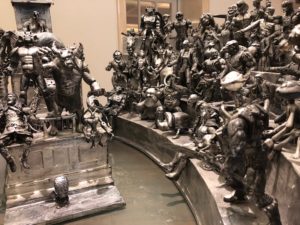 Several luxury London hotels claim to be nearest to Buckingham Palace – the list includes The Lanesborough, Red Carnation’s 41, and Taj 51 Buckingham Gate and, when it comes to superb views looking down into its gardens, InterContinental London Park Lane.  But Conrad London St James is unique in that, if you cross Queen Anne’s Gate into St James’s Park, within five minutes you have a view, as above, of Her Majesty’s little London home.  The hotel is also only ten minutes’ walk from the Houses of Parliament, and one of its many internal sculptures is an allegory of Parliament, a silver papier mâché once-off with caricatures by two Brighton guys who go by the names of Ed Evil and Dan Robotic and work as Evil Robots. 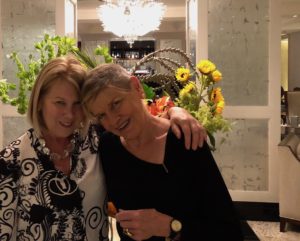 Beverly Payne, the lovely Yorkshire GM, inherited a highly workable 156-room hotel that had opened in 2012 as a franchised InterContinental and two years later became franchised Conrad. Last December, the new Norwegian owners switched it to Hilton-managed, which definitely helps, she says, on the talent side.  She has 210 full-time associates, plus about 150 agency, and it is much easier for them to transfer, to help them onwards with their careers – her own career began, by the way, because her mother had a catering business specialising in weddings and parties, and she got hooked on hospitality. 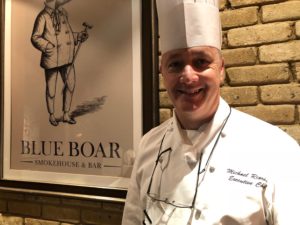 She is incredibly lucky in having a real people-focussed chef, Michael Riordan, the kind of culinary leader typified in London by Peter Kromberg a few years ago.  This is a guy, immaculate in pristine whites even at 7.30 a.m. inspecting the really outstanding breakfast buffet (oh so much fruit), who at all times cares about his young team.  Currently, the main menu at Blue Boar Smokehouse features dishes designed and prepared by his youngsters.  Every item lists who is the artist, and separate pages tell stories about why they go into the business. 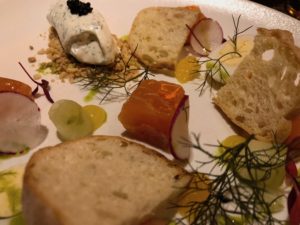 This is great for morale, says Michael Riordan.  He has women, including young mothers, in his mostly-foreign crew, and they send photos back to mummy in Belgrade, Warsaw or wherever. In addition, says his GM, guests are fascinated by their stories – the restaurant does at least 65 dinners every night, which is really extraordinary for a luxury London hotel.  I started with a dish from Rui, from Portugal, who came up with smoked Scottish salmon with halves of quails’ eggs, and I know, from his story, that he decided to cook because he loves food.  This really is an amazingly personal place. NOW SEE A TYPICAL BEDROOM