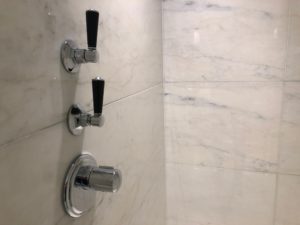 Is the gal unique in getting really excited when showers are easy to work and which, once they are turned on, produce instant hot water? Without wishing to be associated with any advertising push, it does seem that Hansgrohe is the dominant company when it comes to customer-centric showers. Its push-button showers are arguably the most effective – set the temperature and then push a single button for on or off. The Hansgrohe showers at The Langham Hotel in London are remarkably good, too, but then there is so much to rave about at this historic-new hotel, ten minutes’ walk north of Oxford Circus. Historic in that the building goes back to 1797, it was built for a Northamptonshire landowner, Sir James Langham. 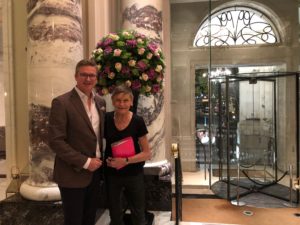 The hotel is also new because of the high-spend creativity that it has been given since it became Langham in 2004. The flowers, predominantly in the brand’s signature pink, seem more and more beautiful with each visit. Eating and drinking, much of it overseen by Michel Roux Jr, becomes increasingly relevant.  Having turned the spa reception, once a bank, into a standalone Wigmore pub, designed by Martin Brudnizki, hotel GM Bob van den Oord is now focussing his attention on his bars. Artesian, for instance, has an intriguing Moments menu, offering such themed cocktails as ‘You went travelling’, namely Santa Teresa 1796 rum, papaya, cardamom. 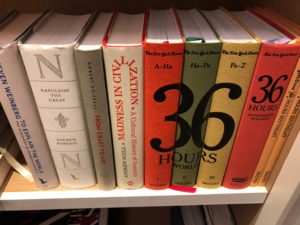 Books for all types…

We dined in Landau, and watched a group of businessmen traipse through from one private dining room to have a cocktail in the adjacent kitchen. Landau has been revolutionised by the ‘artwork’ of a central horseshoe-shaped counter, with a chef slicing to order – we sat up at the counter, and started with three shared plates, San Daniele prosciutto grissini, Kalamata olives; seaweed and cider salami with remoulade, radish; rosemary porchetta, with lovage and grilled vegetables. I heard about the hotel’s forthcoming partnership with Liberty’s of London, over Christmas – how, I wondered, would retailer Arthur Lasenby Liberty who founded his Regent Street store in 1862, for the International Exhibition, feel about it now being owned by an impersonal hedge fund called BlueGem Capital?  More fascinatingly, this hotel partners, year-round, with Daunt Books, run by its founder, a former JP Morgan banker called James Daunt (now owned by Russian Alexander Mamut, Daunt Books’ founder James Daunt is also CEO of sibling Waterstones). 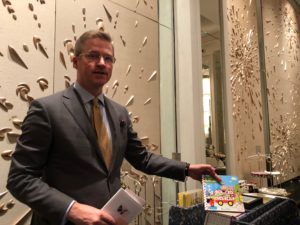 And there are, indeed, books everywhere in this memorable luxury hotel.  One wall of the entrance to the third floor Club, an extensive space with dining, relaxing and chill-out areas – the evening foods it offers, along with all-included Perrier-Jouët Champagne and a big selection of wines, are more than enough to make dinner.  After a good workout in the 24/7 gym and a shower – excellent, of course (AND I had a heated towel rail), there was just time for a quick but good Club breakfast. On my way out I was diverted by Mr Enthusiasm, also known as Bob van den Oord.  He had told me about the Daunt Books trolley of kids books that is wheeled around to family parties at afternoon tea time in Palm Court, and he wanted me to see the cart.  Genius. He had also relayed how the hotel courtyard garden will be a French Winter Village, running from 21 November – this one is a partnership with Grey Goose.  Oh how invaluable is networking in today’s luxury hotel world. NOW SEE FIRST SUITE 750 AND THEN THE CLUB, AT BREAKFAST