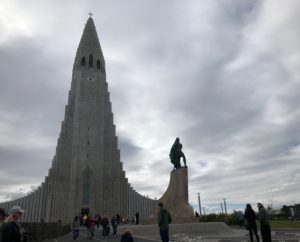 And so, the good ship Navigator sailed into Reykjavik, or rather Skarfabakki dock (it is notable how many cruise docks are not exactly, to be honest, in the best parts of town).  No problem, says the gal, port cabins did not see any of the dockside at all – we looked directly across about a kilometre of water at idyllic greenery with not a single building in sight.  We took a sightseeing trip, kindly provided by Regent Seven Seas Cruises, and necessarily on the list was Reykjavik’s iconic church, Hallgrimskirkja. In front is a statue of Leifur Eiriksson, credited with finding Iceland in 874 – the area around Reykjavik remained farmland until 1752, when Frederik V, King of Denmark, gave the estate to business enterprises.  Today it has a population of 123,000. 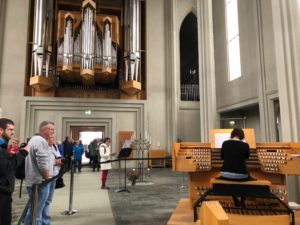 Hallgrimskirkja was designed by Guojon Samuelsson to look like the hexagonal columns of crystallised lava flows: the same architect was also responsible for the Culture House in Isefjordur.  The church, finished in 1974, is so striking outside, but inside it is usually rather stark, in typical Icelandic Lutheran style.  Today however, it was alive with the sound of music.  As part of its Summer Organ Season, Hungarian Kitty Kovacs was playing Bach, Toumemire and Rachmaninov and, thanks to the Klais organ, the music was breathtaking.  (Johannes Klais of Bonn built the organ in 1996, updated it in 2012 – it has four keyboards, 72 voices and, set separately, 5,275 pipes ranging to a height of 30 feet). 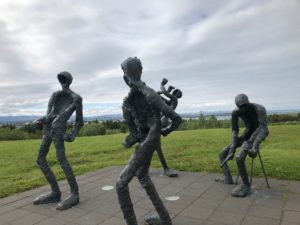 Reykjavik rather likes statues. The one of four dancers, shown here, was done by Porborg Palsdottir in 1970. From her name I know she is female because her family name is her father’s first name + ‘dottir’: a brother could be Hans Palsson, and so on.  The dancers statue adorns the outside of a four-floor dome, Perlan, celebrating the wonders of Iceland.  We went up to the top floor, to walk around the dome’s circumference, which thanks to the icy wind was a great test of whether or not any visitors had false hair pieces.  Many Icelanders’ hair, by the way, is very fine, and very straight, and one of the many pieces of trivia learned during my time here is that Icelandic horses have winter coats of hollow hair, which gives them excellent insulation (polar bears are similar). 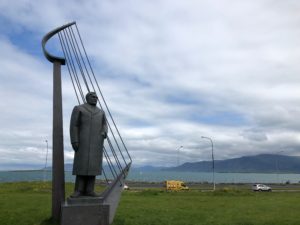 On our trip I did manage to see one interesting hotel, the Leifur Eiriksson a mid-level right opposite the Hallgrimskirkja and thus really convenient for organ lovers, and tourists in general.  The top luxury establishment in this fascinating city has always been Hotel Holt, originally built by a pig farmer on land that had once been a butcher’s shop – now the 47-room hotel is an art gallery for Icelandic art and it supports culture in general.  It is one of the lead supporters of the 2018 organ concerts at Hallgrimskirkja. Talking of culture, I also loved the statue, shown here, of poet Einar Beneditsson, 1864-1940. Asmundur Sveinsson’s likeness, set next to where Gorbachev and Reagan met in 1986, shows Beneditsson in front of a harp, with the words from his Surf poem, ‘Mighty heartbeat of the ocean’s cold depths, my strength and peace I drink from your sound’.