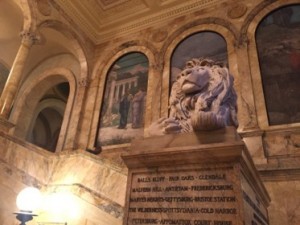 Boston is indeed a village – everyone seems to know everyone else, in their circles. This visit, the gal found she could walk to most of the luxury hotels on her itinerary in just a few minutes, and one such perambulation took her past the Public Library. Oh WOW. This was created 1848 by an act of the Great and General Court of Massachusetts and was the first large free municipal library. It is absolutely MAGNIFICENT inside – the gal wandered up and down the main 93-step stone staircase, admiring the murals and statues. Several of the rooms had literally hundreds of people avidly reading, or working laptops. Perhaps there was a champion novelist in here, or another Agatha Christie in the making. There is a Singer Sargent room, and trompe l’oeil murals here, and others there. 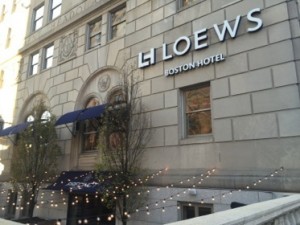 Some of this giant construction of stately rooms would make a splendid luxury hotel. There are actually so many fabulous buildings in central Boston. This is a corner of the former Boston Police Headquarters, which they say opened 1926 (though I am sure a sign there says 1923). It is an imposing ten-floor stone building, on the corner of Berkeley and Stuart – I did visit it a few years ago when it was owned by Doyle, and it had a somewhat utilitarian entrance on Stuart. Then Loews came in, with an investment partner, Perella Weinberg, and they restored the entrance on Berkeley Street. Sadly no memorabilia of the police headquarters survive, other than the building’s name carved into the main exterior. 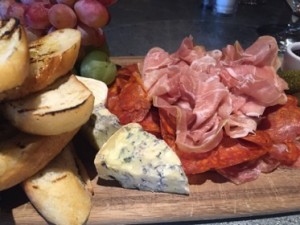 But Loews have worked magic in many ways. I like the fact that all 225 rooms have empty fridges so you can put your own stuff in, including medicines (gosh I HATE automatic minibars, especially in so-called luxury hotels). I like the fact even the smallest room has no fewer than 12 sockets, including two high up, either side of the bed. I like a lobby space called, for no particular reason, Apothecary, with a professional WMF machine for make your own coffee 24/7: there are sockets everywhere, including at high-up refectory tables, and one wall is a giant video screen. And basically I love what Loews has done with its restaurant, now suitably called Precinct. 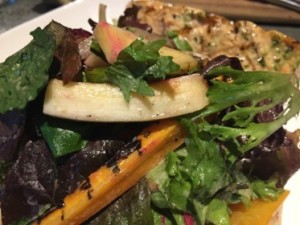 The luxury hotel’s all-day, and evening, restaurant is lower level, and spills out, for over half the year (the summery half) into two sunken terraces, all the more attractive to Liberty Mutual and other big businesses around. I was lunching with the hotel’s GM, John Maibach – inside, at this time of year. He runs lunch as a marketing tool rather than as a money spinner. We started with a shared charcuterie board, a mere $18. People come here mid-day, in and out within 45 minutes or it is free. And then they come back after work, to hang out in what evolves into a sports bar and then a concurrent supper, as opposed to night, club. That is where the money is to be made, says Mr Maibach, with a smile.