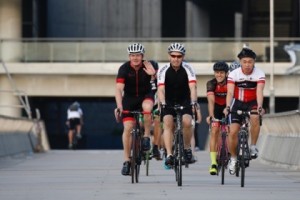 No, for once you cannot find the gal in this peloton of cyclists. Heroes, front row, are Gordon Ramsay on the left, with Tamir Shanel next to him. Tamir has one of the most demanding food jobs in the entire luxury hotel world – feeding those staying in the 2,561 hotel rooms at Singapore‘s Marina Bay Sands as well as outsiders coming in to the celebrity chef restaurants overseen by Daniel Boulud and the like. The latest celebrity restaurant is Bread Street Kitchen, the third of Gordon Ramsay‘s really comfortable gastro-brasseries. The one here only opened two weeks ago, and of course it was essential to head straight there, on arrival in Singapore. 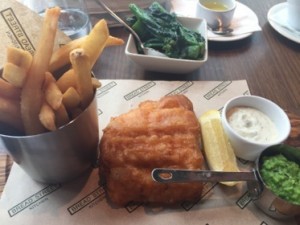 Frankly, Bread Street Kitchen is brilliant. It is on two levels: downstairs you look into Marina Bay Sands‘ mall, upstairs you look out to a public walkway – with cyclists whizzing past – and Marina Bay itself. Like many around me, I had the fish and chips. Lovely chef Sabrina Stillhart said later it was hokkai, and it was fresh as could be. I was with Tamir Shanel, who had another best-seller, the tuna tartare tower – he went on to green pea soup, with a tiny cheesecake tower to follow. And then he rushed me at lightning speed through the mall crowds to see the new Club lounge, moved down from the 57th floor sky-famous rooftop to the 55th floor. Why? He is putting yet another restaurant up there, a Spago by Wolfgang Puck. 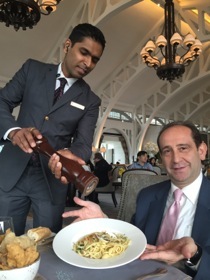 What on earth to do the following day, for lunch? Elementary, My Dear Watson. Check what Giovanni Viterale has overseen at Fullerton Bay Hotel. This is the oh-so-Italian foodie who learned impeccable English while working at Lygon Arms in England’s Cotswolds, whence he proceeded to Claridge’s in London, and, via Dubai, to Hong Kong, establishing Nicholini’s restaurant at the just-opened Conrad where he then spent 20 years. Somewhere along the way he created the most amazing seafood pasta, Linguine Giovanni, which is always on every menu in all his hotels. Right now he looks after two. As GM of The Fullerton Heritage, he oversees The Fullerton Hotel (an adaptation of the old post office) plus Fullerton Bay, plus offices and restaurants and much more. Last time I saw Fullerton Bay the whole experience was somewhat tarnished by having to approach the luxury hotel via a really tacky Clifford Pier event space. 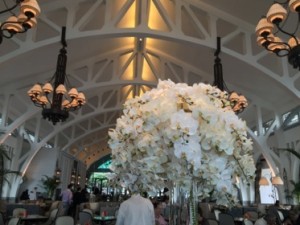 Clifford Pier is the actual 1933 pier that had been leased to a cheapo Hong Kong restaurant group who brought in a pop-up gallery of grunge fashion by Religion. That is all gone, and the entire space has metamorphosed into an absolutely stunning restaurant, designed, like the whole of Fullerton Bay, by André Fu. He has put in delicate blue and beige carpets, matching upholstery, white walls interspersed with massive windows over Marina Bay, and, overhead, eight, 12-light chandeliers. I felt like Cinderella arriving at the ball. What was hitherto grotty grunge is now absolutely gorgeous.