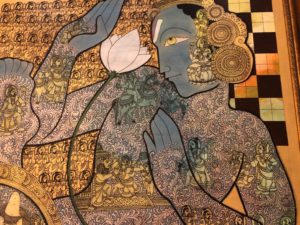 Taj manages two luxury hotels in Chennai and. says the gal, it was a great joy to return to one, and try the other for the first time.  Taj Coromandel, on the Coromandel coast and handy for consulates, is the city’s iconic hotel, where movers and shakers, the leaders who also dine at The Madras Club, tend to hang out. Amazingly, despite the late hour, Area GM Saleem Yousuff led the arrival greeting party (Indian hoteliers certainly know how to make guests feel welcome): this is the would-be civil servant who diverted to hotels because of the long wait to get into a bureaucratic career.  What was governmental loss is hospitality’s gain.  This is a hotel that is always busy, but, this visit, there was time to appreciate some of the art: the two pieces shown, above and to the left, show how any return to India immediately tells you Where You Are. 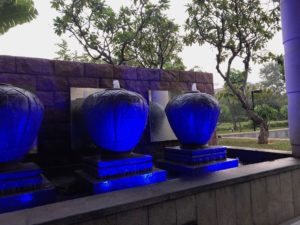 Yes, this was a short visit, in late and out early, but there was time to appreciate the Indian art and, of course, to make use  of the Technogym, which thoughtfully has sudoku on some of the machines.  I also enjoyed looking at, but not trying, the outside pool, but I certainly did admire, and use, the new-look bedrooms. End suite 637 – see a video below – shows how window seats allow a spectacular view, especially from the upper of the seven floors.  Built in 1972 as a private house, Taj Coromandel has expanded, as if nature intended, to the 205-room hotel it is today.  And yes, as well as the services, and service, that today’s top luxury travellers want, this friendly hotel has one-off memories.  Look, for instance, at the blue-lit pots that offer, from their exterior site, a one-off arrival, or departure, pointer. The hotel’s owners, Oriental Hotels, know what they are doing. 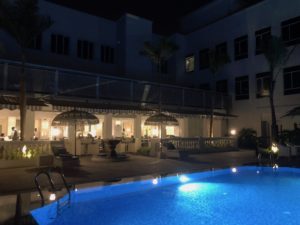 There is a blue memory, too, from the other Taj hotel in Chennai, the Spencer-owned Taj Connemara Chennai.  This 4.5-acre complex, next to Cooum River, dates back to 1854, when it opened as The Imperial – it later became The Albany, then Connemara, after Robert Bourke, Baron of Connemara, who was Governor of Madras 1886-1890 According to records he turned out to have a bit of a roving eye. The first Lady C (Lady Susan Georgiana, daughter of the first Marquess of Dalhousie, a former Governor-General of India, whom he married in 1863) left him, moved into the hotel and stayed there for a year until she could get on a ship back to Europe, presumably Scotland. She divorced him in 1890, but it is probably her, rather than her successor, Gertrude, after whom the hotel’s bar, The Lady Connemara, is named.  Today, newly-restored, Taj Connemara evokes the same century-old architectural style as, say, Delhi’s Imperial. 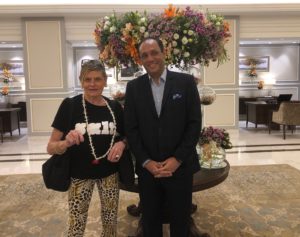 GM of the Taj Connemara, Ahmar Siddiqui, is understandably proud of his gorgeous 147-room luxury hotel, tweaked in 1974 by Geoffrey Bawa and, in 2018, by London-based designer Susan Freeman.  It is, simply, gorgeous.  I loved going ‘out’, as it were, to the hotel’s own freestanding Raintree restaurant, featuring live sitar music and signature carnivore-centred Tamil Nadu Chettinadu cuisine.  And next time I hope to try the luxury hotel’s five ‘experiences’ that Siddiqui has introduced.  Every afternoon at 5 p.m. there is a historical tour of the hotel, which takes in some priceless photos that include The Queen, standing in an open-top 1961 cruiser as she is driven past the hotel on a tour of what was then Madras.  Lady Connemara’s Bar has two new cocktails, one of which, the Since 1881, is made with Connemara Irish Whiskey from Cooley Distillery, Co Louth. Third experience is an enhanced afternoon tea. Another is the hotel’s bespoke Coorg coffee, and tea, both from Tata-owned estates. And fifth experience is a partnership with Story Tale, a local operator that offers city walks of places associated with the Connemara. NOW SEE TAJ COROMANDEL SUITE 637, TAJ CONNEMARA SUITE §85 AND TAJ CONNEMARA LOBBY