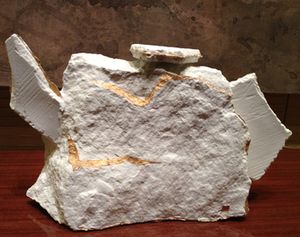 Right, where is the gal now?  We left her somewhere else in this beautiful world, and then after a blissful overnight flight – always blissful when you sleep like a log – she arrived in China, at the just-opened Mandarin Oriental Pudong, Shanghai.  This is the scintillating city’s newest new-build luxury hotel. A simple sculpted ‘teapot’ in the bedroom showed it is 2013, with sense of locale, and tradition. 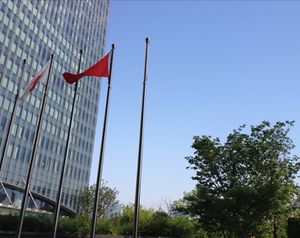 Exterior of the hotel

Outside, in the turning circle that is 100 yards from the Huangpu River – east bank, in the Luijiazui finance-harbour sector, only 300 yards from the television tower – there you are greeted by flags, of China and Mandarin Oriental.  You look up at a gleaming glass and steel building, soaring 25 floors.  Thirty yards away is another, similar, block. This one is apartments, rent, one month or more, identical to the hotel’s suites but you have a microwave, possibly a washing machine. 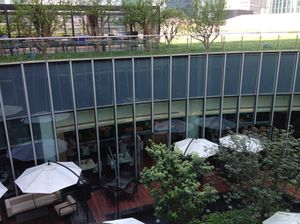 Look down at restaurants’ terraces

You can also look down, from outside. In the middle of the turning circle’s garden, sunken windows give daylight to the spa below.  Look down, to one side, to the terraces off all the restaurants. At the hotel’s main door, see the baggage trolleys, customized works of art with curlicues that say ‘China’. They even invite little kids to climb on them.  Forget baggage, to have a climbing frame awaiting is lots of fun (they like kids here – restaurants have pre-set places with brightly-coloured plastic plates and knives and forks). 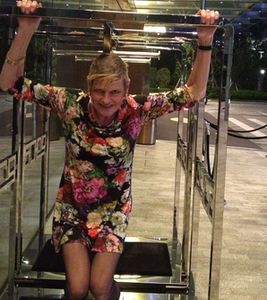 Playing on a baggage rack

This used to be one of Shanghai’s ship-building zones and now it is being reconceptualised as Harbour City. There is already the start of a major yacht club, and new construction around will enhance the area’s lifestyle. Will a former warehouse, a lovely brick building, become a performing arts centre? Will the river-bank walkway, nearly a mile long and much used by morning runners, walkers and tai-chi fanatics, be lengthened?  Harbour City is also about money.  The hotel is actually flanked by major bank buildings, much taller than itself. 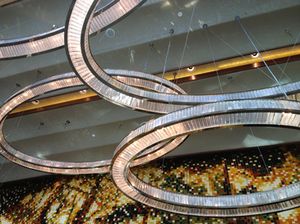 Looking up at the lobby ceiling

But reminders of the area’s past remain.  Go into the hotel’s soaring and statement lobby, and you are greeted by, in front of you, a whole-wall collage of glass tiles, each about two by two inches, set in such a way to remind you of the greenery that at one point surrounded the shipyards.  Overhead are 16 ceiling-hung lights, each an inner-lit oval, the kind of shape that, halved, was the backbone of a ship’s construction. 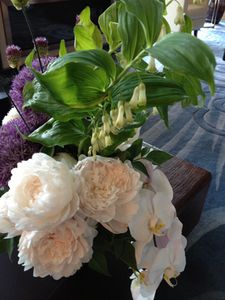 Flowers in a suite

Of all of the 362 rooms in this luxury hotel, the two presidential suites have best views, best news. Take 2501, 8,000 sq ft total, a third of which is outside terrace (top floor, so you look out through the letters emblazoning the hotel’s name to the world).  Inside, you revel in two bedrooms, two fires, ten dining places and fabulous flower arrangements. Let us learn more…