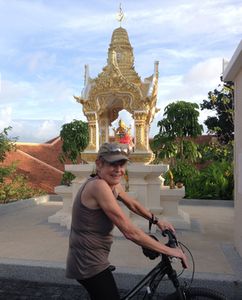 Arriving back at The Regent before it got too hot

There is nothing like an early morning cycle ride before the sun gets up, and seeing bikes outside the main door of any luxury hotel increases perceived value – at least to the gal.  At The Regent Phuket Cape Panwa – at the far south-east of Phuket Island – bikes were there, and waiting, and they all looked well maintained.  It turned out that it was a jolly good thing that the brakes were working as even going down the resort’s half-mile tarmac drive, a twisting road between immaculately-manicured grounds, turned out to be what could have been a slippery slope.

Back home, having done nothing but roller coasters the entire time, a temple stood, as if in welcome. 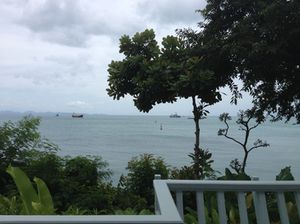 Looking out from Pool Villa 31

By now it was light enough to check the view from Pool Villa 31, one of 35 to have private pools. The one main room goes down two steps to the living area, whence you look out, through finest bamboo blinds (which of course I pulled up), to your bijou balcony, about three feet deep but with built-in wood seating.  This is at the end of the long-leg of your L-shaped space. The bathroom, with big round tub, is at the end of the short-leg of the L, and in the apex is your terrace with a plunge pool that is great for about four strokes. My favourite of the total 70 rooms would be 32, one nearer to the beach steps and to the walkway up to the Great House, but any pool villa gives access to the all-day Regent Club that opens September 2013. 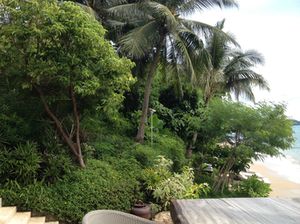 Spy the CCTV in the lush undergrowth

This hotel as such opened this February, but it is a reincarnation of the Panwaburi Resort that opened in 2000, and closed.  It was then to be Conrad, then Radisson Regent, and then the owner spent oodles of money in adding what Ralf Ohletz, boss of the new, and ‘real’, Regent wanted, things like a rooftop evening-lounge built around lots of decorative pools with bases of river stones.  The owner also invested heavily in unseen security.  Look hard and you can see a CCTV in the centre of this shot, just in case anyone fit enough would think of climbing up the 47 concrete steps from the beach – in which he, or even possibly she, would first hit villa 32 so perhaps villa 31 is best after all. 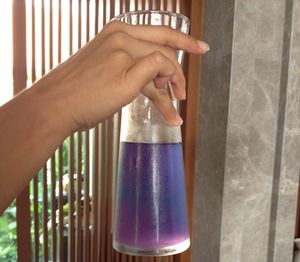 The owner has also spent heavily on the main pool, 160 feet and infinity edged, and in the airy spa.  I had a hot poultice neck massage, which followed the usual Thai muscle-pressure with hard swabbing of a ball of hot wrapped herbs.  It smelled good and I guess I still smell good, hours later.  The spa’s drink is the Thai butterfly flower special. The initial water is blue. Pour in lime juice or another acid and it turns pink. Thai toddlers love the look and so do adult tourists – and spa-goers.  There is actually lots of imagination here.   My welcome drink, in my villa, was a deep red liquid in a china-topped glass bottle.  Called ‘Awesome antioxidants’, it contained beetroot, carrot, ginger, orange and pineapple and promised to remove toxins help a youthful complexion. 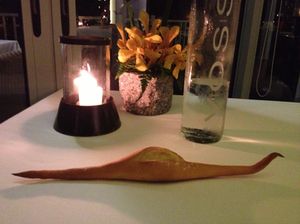 Bread ‘hybrid’ on the table…

My farewell drink, which the imaginative New Zealand chef, Justin Baziuk, put in the airport car together with the ordered caprese panini, was a green liquid in another china-topped glass bottle.  This one was labelled ‘Mother Nature’s Power drink’ and was composed of pineapple, royal jelly and spinach. According to the label, pineapple has bromelain, which fights heart disease and arthritis, and royal jelly feeds the brain as well as fighting cholesterol and inflammation. Every meal was lots of fun, here.  At dinner in The Grill, we were presented with bird-shaped breads that he calls hybrids. The centre of the ‘body’ is baguette and either end becomes grissini.  Love it. 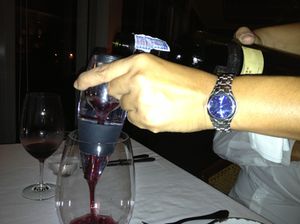 .. and pouring wine over an instant personal dispenser, over the table

No wonder The Grill is so popular, with people staying in the luxury hotel as well as others coming in.  A lot of the dishes are simply grilled on lava stones – he also cooks with the wok and is introducing tandoori.  Take the wine service. Your chosen bottle comes with a weird little contraption.  Pour the wine in at the top and as it goes through, to come out at the bottom straight into your glass, it has been aerated as much, apparently, as having been in a decanter for some time.  There is always something new, in this marvellous life.  Every day.