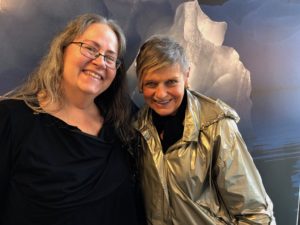 Greenland is an oxymoron. Over 80% of this vast island nation, more than three times the size of Texas, is permanent icecap (if it melted completely sea levels would rise around 20 feet worldwide). There are no trees, and not much other vegetation. But the gal’s first visit was an introduction to a really colourful country. Housing, mostly in two or three-floor Scandinavian-type blocks, is brightly hued, originally because many people could not read – want to find fishermen? head for green houses.  Now, with 100% literacy, that tradition has been continued.  Seven Seas Navigator docked in the main harbour of Nuuk, the national capital. We boarded some of the city’s 20, sic, buses, all bright yellow, for a tour around, which included stopping for a photo opportunity at the national cemetery, where all the plots face the water, for good luck. 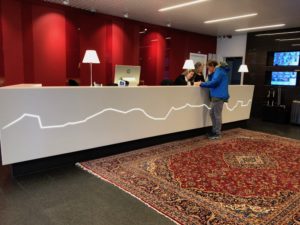 After that bit of sightseeing I went for an equally fascinating introduction, to the city’s only luxury lodging, Hotel Hans Egede, named for the Danish-Norwegian Lutheran who in the early 18th century tried to turn Greenland to Christianity (wonder what he would say if he coincided, as I did, with a 350-strong meeting of local Jehovah’s Witnesses at Hotel Hans Egede?). This is a really comfortable hotel, with a barista on front desk, and lots of colour everywhere.  It caters not only for meetings but looks after government business, and sometimes has Chinese speculators who have been trying, unsuccessfully, to lobby Prime Minister Kim Kielsen to allow them to expand Nuuk airport’s one runway. 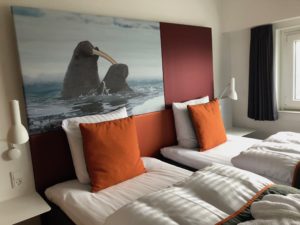 Greenland, with its 56,000 population, now has much independence from Denmark but that country not only contributes about a third of the island’s budget but also makes final decisions. There are so many Danes here.  My new friend Marianne Holdgaard Rasmussen came from Copenhagen in 1990 and, apart from visits home twice a year, she stays put, here.  As GM of the 156-room hotel, which in addition has 20 apartments to rent, she has no problems filling rooms. There is no competition, and business does have to come to this city, plus airport delays frequently mean last minute demands for beds – her most famous guest, Hillary Clinton, obviously booked ahead, and had the courtesy to write a lovely personal note after her 2012 stay. 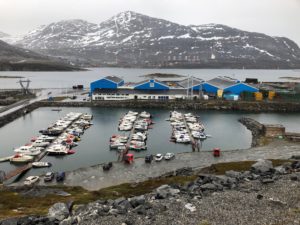 The marina, emptied before the sea freezes in October

No, the challenge, says Marianne Holdgaard Rasmussen, is that Nuuk, which has a population of 17,000, operates on near-zero unemployment, and finding staff means relying on the cameraderie of those already in the team. She also has to staff the hotel’s two restaurants, which include a franchised A Hereford Beefstouw, as in Adelaide and Melbourne as well as in 12 locations in Denmark – the beef mostly comes from Australia but if you want local go for red Löjrom roe with blinis, followed by Greenland redfish, or musk ox or reindeer filet, and dessert has to be vanilla ice cream with raisins in rum, ginger, whipped cream, powder coffee, and what is described, both in English and Greenlandic, as ‘Caloric’ liqueur. Really, Hotel Hans Egede, still privately owned by its Danish founders, Carl Juhl and Helge Tang, is an unforgettable, and most agreeable hotel.