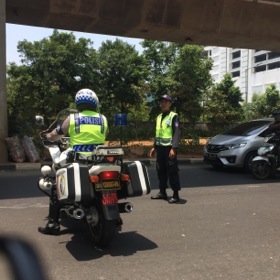 A police outrider led the way…

For those who have never experienced it, travelling through town preceded by a police outrider is, well, rather cool (come to think of it, in another life the gal would not mind being a police outrider – that would be even more cool!). Anyway, one of Jakarta‘s most central luxury hotels, Mandarin Oriental, was arranging a pickup for a journey that was not actually long enough to satisfy the sensation of being VIP-ed in this way. What was also sensational, the pickup was arranged, and escorted, by a creative young Bavarian, Christian Dolenc, whose day-job is managing rooms at the 272-room hotel. He had temporarily escaped, to find and decorate a local bajai, tuk-tuk. And here it is. 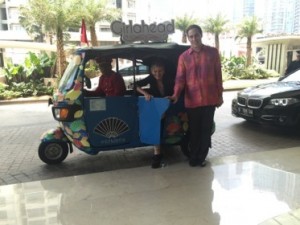 Personal signage on top, of course, and my name, in big bold letters, on the rear. We set off, he and I, driven by someone in the full scarlet and gold livery of the hotel. A traditional modern limousine followed, with the Porsche Rimowa, and my MacBook Air. As we proceeded along Sunday-quiet streets, a phone rang. It was hotel GM Max von Reden, who was having a weekend business meeting with his colleague Tony Costa, GM of Mandarin Oriental Tokyo. There they both were, breaking off from their labours to find out how everything was doing here in Jakarta. Very well thank you, and so it was to continue. I learned a lot about Jakarta hotels’ history, from the Bavarian who has wide-interests in everything, and his colleague James Berhitoe, von Reden’s deputy who has been here at the 1979-vintage hotel since 1982. 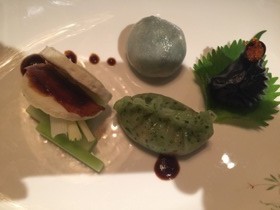 No, we decided, he is not the longest-serving Mandarin Oriental Hotel Group serving team member. Both gold and silver accolades go to Mandarin Oriental Hong Kong, to Danny Lai, who joined 1972, and Giovanni Valenti, 1979 vintage. When James Berhitoe started here, after years on cruise ships, the hotel had 419 rooms – it was closed in 2007 for two years for a complete re-do, which took the number down. It has been through so many GMs, Danny McCafferty, Duncan Palmer, Graeme Laird, Ingo Peters, Alan Hepburn, Andy Abrams, Mark Bradford and now Max von Reden. I love hotels’ history. Here, the Italian restaurant has come and gone. The Chinese restaurant, Xin Hwa, closes temporarily next January for a new look. 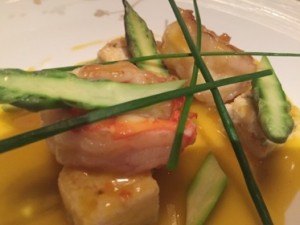 Today, the chef started us off with crispy pekin duck skin with pancake and hoisin sauce, crystal dumpling with Alaska crab and spinach, a steamed vegetable dumpling, and a seafood and fish roe dumpling. Next came steamed Pacific garoupa with an egg white sauce purée and coriander, served in a Cantonese clay pot. Next were wok stir-fried prawns with homemade bean curd and asparagus. Next was a dumpling filled with stir-fried mee sua noodles with seafood. After that I said stop, please, and anyway it was time to move on – though all the local Indonesian-Chinese families around us seemed to be determined to spend all the afternoon eating in this luxury hotel.