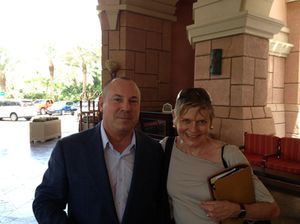 Serge Zaalof, at Atlantis The Palm

So, gal, continue your journeys here in Dubai.  Every visit, there is something new.  The over-road metro now whizzes miles, above and parallel to Sheikh Zayed road and then curving round to the airport – look down at the stations and they appear to be wrapped in gold. 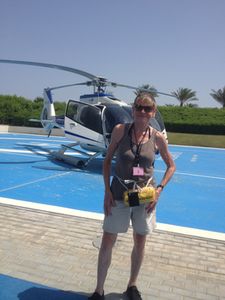 Helicopter at The Atlantis’ landing pad

Never put anything beyond the realm of possibility here in Dubai.  Every year there are yet more luxury hotels, but some go on and on.  The big boss of Atlantis, Serge Zaalof, comes to say goodbye (does he really think he is losing the gal forever?). The stylish way to travel around Dubai is by helicopter, and AlphaTours, operating the service at Atlantis, use EC130-B4s. The safety briefing is meticulous and the three of us on our trip parade out, in single line, with yellow bum bags tied round our tummies.  These are our lifevests.  We have a pre-departure video briefing, and a verbal briefing onboard. Justin Bieber arrived by chopper for the DJ bonanza last night. 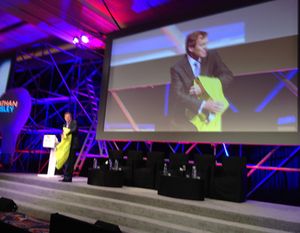 This is the week when, annually, Dubai is the world centre of travel and tourism.  To create an impact at the opening of the vital Arabian Hotel Investment Conference, Co-Chairman Jonathan Worsley, also safety-minded in yellow hard-hat and day-glo safety vest, climbed down the ‘scaffolding’ that formed the stage background in the conference room at Madinat Jumeirah.  To great applause, he then started introducing the people who would talk – and talk. Luxury hotels in this area are, well, surging forward. 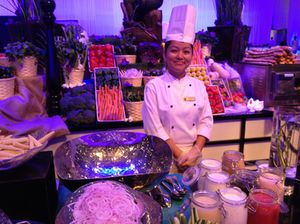 Chef at the ready

The conference may be about development but what came up again and again is that, at every level but especially at the luxury level that is GirlAhead, it is also about people.  PEOPLE. Gosh Jumeirah did themselves proud.  They showed off their culinary skills at both networking lunches, with buffets that would make even the most egocentric TV chef keep quiet, at least for a few seconds before catching breath.  For over 600 people, buffet style, they were carving and mixing on request, at many different serving areas. 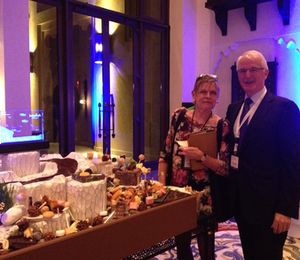 Gerald Lawless at the…

Jumeirah also hosted the opening night’s superb cocktail (well, it was Laurent-Perrier, and nonstop, and anything else you wanted) buffet (again outstand food).  Executive Chairman and CEO of Jumeirah, Gerald Lawless, was personally displaying the 32-foot flowing river of hot chocolate.  Like the £14-million moving-river in London’s Hyde Park that, as if defying gravity, flows continuously in one big circle, here the hot chocolate flows round and round an elongated oval.  Dip in what you want, strawberries or marshmallows. 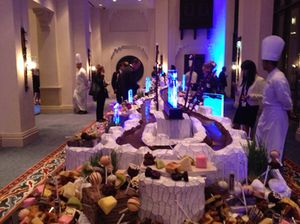 Standing near is the young chef, who works at the luxury Madinat Jumeirah hotel complex, who designed and created this masterpiece.   At the final lunch, to the resounding background of the Star Wars theme tune, a heavy overhead bar, about 30 feet long, was lowered.  On it grew wheatgrass, on which were balanced plates of elegant one-bite desserts.  Eat your hearts out, inflated celebrity chefs, bet you cannot be as creative as these guys and girls in the Jumeirah empire.